If you have been to Diwali card parties before, then you'd have at least heard of Teen Patti if not played. Teen Patti is an Indian version of poker game played with just three cards. Now as Diwali 2019 is nearing, we give you all the information about this game, the rules, techniques and how to play it. 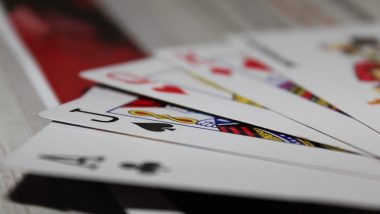 It is time to take the playing cards out of your drawers as the festive season of Diwali 2019 starts tomorrow. From Dhanteras to Bhai Dooj, the next five days are going to be of a lot of fun, festivities and family get-togethers. It is also the time for Diwali taash parties. The essence is to play games, mingle with everyone and make good memories together. If you have been to Diwali card parties before, then you'd have at least heard of Teen Patti if not played. Teen Patti is an Indian version of poker game played with just three cards. Now as Diwali 2019 is nearing, we give you all the information about this game, the rules, techniques and how to play it. Diwali 2019 Party Invitation Card Format: Messages, Images to Send Your Friends and Family to Celebrate The Auspicious Occasion.

Teen Patti is a betting game and Diwali taash parties are arranged with an idea that people will be putting their money on the game. The party scene has evolved so well over the years, that nowadays there are professional dealers who take care of hosting the game. The more the guests, the more the fun and it is mostly seen among the higher class of the society. Although, one can always play the game without any money involved. If you are unaware about how to play Teen Patti, let us make it easier for you. Diwali 2019 Dinner Party Menu: From Appetising Starters to Mouth-Watering Dessets, Here's a Complete Menu for a Hearty Deepavali Night.

What is Teen Patti

Teenpatti is a little twist given to the three card poker. It is identical to 3-card brag which is popular in the UK. It is also called as Flash. Each player is given just three cards and the rest have to be shuffled, each one picking a card on their turn. The winner is the one who has the best hand or the highest hand based on the cards ranking in the game.

Trio: When all the three cards are of the same rank. Three aces are the best trio and three twos are the lowest.

Straight run: Three consecutive cards in order but the same suit. Ace can be used in the run A-2-3, which is the highest straight run. Next comes A-K-Q, K-Q-J and so on down to 4-3-2, which is the lowest.

Pair: It is a pair when two cards are of the same rank. Between two such hands, compare the pair first, then the odd card if these are equal. The highest pair hand is, therefore, A-A-K and the lowest is 2-2-3.

High card: When none of the three cards are in any of the above-given sequence, the order of the value is compared. The highest card first, then the second-highest, then the lowest. The best hand of this type is A-K-J of mixed suits, and the worst is 5-3-2.

Watch Video of How to Play Teen Patti:

The betting factor can be decided by all the players. Before the cards are dealt, the boot amount is decided and collected from each player. It is the minimum stake amount put in centre of the table. With each turn, the money in the pot grows and each player contributes the said amount. The one gets the highest rank wins the money.

Although betting is not a good idea to play this game, you could trade in with chocolates or toffies. Ir you can play it without betting anything at all, it is the fun element that matters after all. We do not advise you to get into extreme gambling in the taash parties. Hope you have a good game!

(The above story first appeared on LatestLY on Oct 24, 2019 02:39 PM IST. For more news and updates on politics, world, sports, entertainment and lifestyle, log on to our website latestly.com).