Dussehra 2018 Date in India: When Will Vijayadashami Be Celebrated This Year & Shubh Muhurat of Ravan Dahan?

Get all information on Ravan Dahan 2018 date, Sindur Khela 2018 date, Subho Bijoya 2018 and everything here. 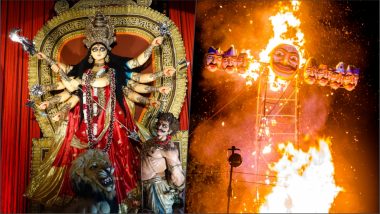 Dussehra and Vijayadashami is celebrated on the last day of Sharad Navratri (Photo Credits: Wikimedia Commons and Flickr)

Dussehra or Vijayadashami is celebrated on the on the tenth day of Navratri in the month of September or October. Navratri or Navratri, meaning ‘nine nights’ is a nine-day Hindu festival is celebrated across India. At the end of Sharad Navratri, considered the most significant of four Navaratri, we celebrate Dussehra by performing Ravan Dahan.

The festivities and celebrations represent the victory of Good over Evil. Goddess Durga who is the primary deity of Navratri restored Dharma in the universe after killing buffalo demon Mahishasura on Vijayadashami as per Hindu mythology. On the same day, Shri Rama, an avatar of Lord Vishnu killed demon king Ravana to free the earth of his tyranny. It is believed Lord Rama prayed to Durga to seek her blessings ahead of his battle with Ravana. So, what is Dussehra or Vijayadashami date in 2018? Get all information on Ravan Dahan 2018 date, Sindur Khela 2018 date, Subho Bijoya 2018 and everything here. When is Dussehra 2018? Confusion Over Date - Vijay Dashmi on October 19, Public Holiday on October 18.

In 2018, the ‘Festival of Nine Nights’ Navratri began on October 10, Monday and conclude with Maha Navami (the ninth day of Navratri) on October 18, Thursday. The tenth-day after Navratri is Vijaya Dashami and on this day Dussehra takes place. So, Dussehra 2018 will be celebrated on October 19, Friday. This is widely popular in northern, western, central and southern parts of the country. Mysore Dussehra 2018 Date & Story: Know the History, Significance & Celebrations of Mysuru Dasara.

Dussehra is celebrated to mark the victory of God Rama over Ravana, the demon king of Lanka who had abducted Rama’s wife and Goddess Sita. Shri Ram’s victory represents the victory of good over evil, right over wrong. An important ritual during Dussehra celebrations is Ravan Dahan, burning the effigies of Ravana, his brother Kumbhakarna and Ravana’s son Meghnath. Ravan Dahan signifies burning ones’ negative qualities just like Rama broke Ravana’s ego and pride by defeating him in the battlefield and eventually killing him.

The Shubh Muhurat of Ravana (Ravan) Dahan in India is on 19th October 2018 starting from 1:13 PM to 3:28 PM. This time is in Indian Standard Time, and will vary with your geographical location.

Navratri celebrations differ from place to place as per their cultures and traditions. While most of the country observe Navratri for nine days, the eastern states of India, Kolkata, Bihar, Jharkhand, Assam and others mark Sharad Navratri by celebrating Durga Puja or Durgotsav. It begins seven days after Mahalaya (end of Pitru Paksha) and this year Durga Puja 2018 started from October 15 with Maha Panchami. After Subho Sasthi, Subho Saptami, Maha Ashtami and Maha Navami, the five-day festival concludes on Vijayadashami falling on October 19, 2018. Vijayadashami is also known as Subho Bijoya in Kolkata. On this final day, Sindur Khela also takes place with married women playing with red vermillion. Finally, Durga Visarjan (immersion of Maa Durga idols) takes place as the last ritual on Vijayadashami to mark the end of Durga Puja festival. Navaratri 2018: From Durga Puja to Dussehra, Check How the 9-Day Sharad Navratri Festival is Celebrated in 9 Different Ways in the Country.

What is Lord Rama’s Connection With Durga?

The customs and rituals for Dussehra and Vijayadashami celebrations differ, but there’s a significant connection. According to Hindu epic Ramayana, Lord Rama who went on war with Ravana, sought Maa Durga’s divine blessings. He performed Akaal bodhan, meaning worship Durga in an uncustomary time before starting the battle. To please Maa Durga, he decided to worship with 108 Neel Kamal (blue lotus). However, Rama fell short of one flower and decided to offer one of his eyes (they epitomised blue lotus) as the replacement. Seeing Lord Rama’s devotion and penance, Goddess Durga appeared before him and blessed him with success. As per Hindu mythology, Rama’s battle with Ravan started on the Saptami and was killed on the tenth day, Dashami also known as Vijaya Dashami (victorious tenth day).

(The above story first appeared on LatestLY on Oct 17, 2018 06:33 PM IST. For more news and updates on politics, world, sports, entertainment and lifestyle, log on to our website latestly.com).