Fourth of July 2020 Fireworks Live Streaming: From New York's Macy's to Nashville's Let Freedom Sing, Watch Out For These Virtual celebrations of Events in The US 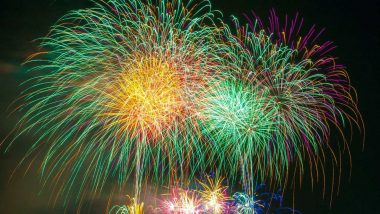 The Fourth of July is approaching and Americans are quite excited about it. While COVID-19 has affected the celebrations, the spirit of the people is high. The holiday is usually celebrated with family reunions, parties, barbecues, parades, fairs, fireworks, children workshops and a lot more. Fireworks being a highlight of US Independence Day celebrations is attended by large crowds every year. However, many have been cancelled this time due to the pandemic, with some live streaming the fireworks event for online users. And as we wait for the fourth of July, we bring to you popular fireworks events held across the US. Fourth of July 2020 Fireworks Live Streaming for Free Online: From Macy’s to Washington D.C., Here’s Where and How You Can Watch American Independence Day Firework Display From Home.

Macy's fireworks which are the most popular night show will be live-streamed on national television this year. While some have cancelled their events, others have planned to pay tributes to COVID-19 frontline workers during fireworks event. Here is a list of fireworks to watch out for on the Fourth of July. US Independence Day 2020: Significance of Fourth of July Date, History & Importance of the Day That Marks the Declaration of Independence of the United States.

Macy's Fourth of July fireworks will grace the skies of New York in the night. Mayor de Blasio will inform people with the exact details of the fireworks to be held from June 29 to July 1 with the grand final being at the Empire State Building on July 4 The event will live-streamed on NBC on July 4. It will also include music, tributes to healthcare workers and those fighting the pandemic.

Nashville hosts annual Let Freedom Sing with varying celebrations. Performances including musicians are held with fireworks. They will also live telecast fireworks to honour frontline responders at 9 p.m. Central Time on News Channel 5. Why Are There Fireworks Every Night Across US? Here Are Major Conspiracy Theories Behind Frequent Fireworks Activity and How You Can Sleep Through It?

The White House in a statement said that President Donald J. Trump and First Lady Melania Trump, along with the Department of Interior, will host the 2020 Salute to America on the South Lawn of the White House and Ellipse on Saturday, July 4.  The statement added, "In addition to music, military demonstrations, and flyovers to honour our Nation's service members and veterans, the President will deliver remarks that celebrate our independence and salute our amazing heritage. The evening will culminate with a spectacular fireworks display over the National Mall."

O Chicago's Navy Pier has been cancelled due to COVID-19 pandemic this year. Orland Park will host a concert at 7:30 p.m., followed by fireworks at 9:30 p.m.; Romeoville will host a fireworks show in three different locations on July 3 at 9:30 p.m. Canada Day 2020 Fireworks Live Streaming Online For Free: Where and How to Watch the Virtual Events to Mark This Year’s Dominion Day.

Boston’s annual Boston Pops Fireworks Spectacular will be broadcast A Boston Pops Salute to Our Heroes. It will be aired on Bloomberg Television, Bloomberg Radio, and Boston’s WHDH-TV, on July 4, starting at 8 p.m. ET.

While the holiday may look different this year, there are still means and ways to celebrate it. Let's keep the spirits high this year and be a part of the celebrations with our loved ones being at home.

(The above story first appeared on LatestLY on Jul 02, 2020 07:52 PM IST. For more news and updates on politics, world, sports, entertainment and lifestyle, log on to our website latestly.com).