Kamika Ekadashi is considered to be an important festive occasion for the people of the Hindu community. It is observed in the holy month of Shravan. Kamika Ekadashi is also popularly known as Pavitra Ekadashi. People observe Kamika Ekadashi Vrat, while worshipping the Upendra avatar of Lord Vishnu on this auspicious day. 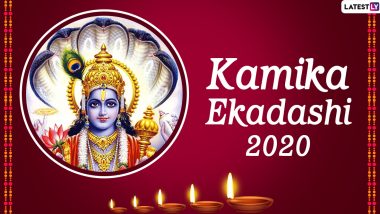 When will be Kamika Ekadashi 2020 celebrated?

What are the timings of Kamika Ekadashi 2020?

What are the rituals of Kamika Ekadashi?

There are several rituals that devotees follow on this occasion of Kamika Ekadashi. To begin with, people take bath in the early morning, rather at the time of sunrise. Some people also offer special offerings to Lord Vishnu. They chant mantras, sing bhajans, and different types of pujas are performed as a mark of respect to Lord Vishnu.

Devotees observe fasting, which is also popularly known as Kamika Ekadashi Vrat. It is not compulsory to keep a fast, and hence some people observe it fully, and some partially. People visit temples as well, on this special day. They offer milk, sesame seeds, Panchamrit, flowers and fruits to the deity among other things, on their visit to temples, or during their celebrations at home.

What is the story and significance of Kamika Ekadashi?

The legend says that once a landlord accidentally killed his tenant (who was a Brahmin) in a fit of rage. Later on, he was consumed with guilt and wanted to apologise and make amends for his crime. He then met a sage, requesting to free him of this sin. The sage advised him to observe this Kamika Ekadashi fast.

Eventually, the landlord observed all the rituals and observed Kamika Ekadashi. Lord Vishnu appeared in his dream and relieved him from the shackles of this sin. The moral of the story is that people who observe this Kamika Ekadashi Vrat, they can be forgiven even after killing a Brahmin.

There’s a lot of importance given to Kamika Ekadashi in the Hindu scriptures. It is said that people who fulfil the rituals on this day, then they are blessed immensely. It is also believed that worshipping Lord Vishnu this day can get them rid of Pitra Dosha as well. Devotees are freed from their sins if they observe Kamika Ekadashi Vrat by Lord Vishnu, who instead fulfils all their desires.

(The above story first appeared on LatestLY on Jul 16, 2020 09:35 AM IST. For more news and updates on politics, world, sports, entertainment and lifestyle, log on to our website latestly.com).