India observes Kisan Diwas on 23 December which is the birth anniversary of Choudhary Charan Singh, the fifth prime minister of India. A farmer is the very soul of society. Farmers' Day 2021is celebrated to honor the contributions of farmers as well as to glorify their significance in building the country. Read more to know about Kisan Diwas 2021. 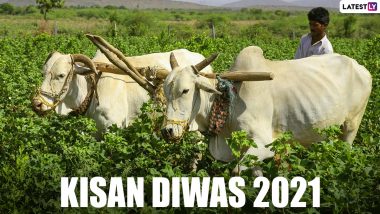 India is an agricultural country, and farmers are the backbone of the country.  Our prosperity depends upon our agricultural production. Therefore to promote awareness and to thank and reward all the conscientious farmers for their contribution to society Farmer's day is celebrated every year. Farmer's Day or Kisan Diwas in India is observed on 23rd December annually to commemorate the birth anniversary of the fifth Prime Minister of India,  Mr. Choudhary Charan Singh.  He held the post between 1979 and 1980.

Kisan Diwas or Kisan Divas is celebrated especially in those states of India which are actively engaged in agriculture and cultivation such as Uttar Pradesh, Punjab, Haryana, Madhya Pradesh among others. Kisan Diwas 2021 Greetings: Happy Farmer's Day Wishes, Quotes, Posters And Messages to Honour the Hard Work of Farmers Across the Nation.

Kisan Leader Chaudhary Charan Singh served the nation for a very small period of time from July 28, 1979, to January 14, 1980. He was known for his pioneering work to promote the upliftment of farmers and the agricultural sector. Chaudhary Charan Singh brought some of the most extraordinary reforms in the agrarian sector and is titled by many historians as the ‘Champion of India’s Peasants.’

In 2001, the then government-designated Charan Singh's birth anniversary as Kisan Diwas. Mr. Singh Singh followed the famous slogan "Jai Jawan, Jai Kisan" which was given to the farmers by Lal Bahadur Shastri, the second Prime Minister of India.

Kisan Diwas signifies the need to listen to all the diligent farmers across the nation and ensure their economic and social security. Even though people can't leave without food, which is one of the basic necessities of life, still we remain ignorant about the necessary information about the agriculture sector of the country. Many of the country's soldiers also come from farmers' families.

On Farmer's day several forums, competitions, debates, and quizzes are organized to discuss the various issues related to farming and cultivation. Throughout the year, the Indian farmer remains busy tilling the fields, sowing seeds, and reaping the crops. That is why Kisan Diwas is celebrated to pay tribute to the farmers. The day also focuses on educating farmers with the latest learnings of the agricultural sector.

(The above story first appeared on LatestLY on Dec 23, 2021 10:55 AM IST. For more news and updates on politics, world, sports, entertainment and lifestyle, log on to our website latestly.com).