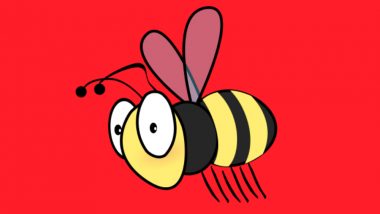 Bees and other pollinators have been under danger due to human activities. With the decline in bees population, it could put an end to humans with the end of bees. Our buzzing little friends have a lot of variants. From tiny stingless bees to Megachilidae that can grow upto 39 millimetres, every bee has its own importance. On the third Saturday of every August, the USA celebrates National Honey Bee Day to pay respect to our most famous pollinator for keeping us alive. Don't Step on a Bee Day 2019: Significance of the Day Meant for Awareness About Bee Population.

By now, we all know or have been told about the importance of bees. Unlike any other random insect, a bee plays a vital role in the ecosystem. Not just by providing us honey and beeswax, the honey bee has a lot under its sleeve. As we celebrate another National Honey Bee Day, let’s have a look at the history and significance. World Bee Day 2019: Date, Significance & Theme of the Day Dedicated to Honey Bees.

The day was first observed when in 2009, a group of beekeepers signed a petition with the United States Department of Agriculture (USDA) for a day for the bees and beekeeping. The date was first decided as every fourth Saturday of August but, was later changed to the third Saturday of every August. In 2009. National Honey Bee Day was celebrated on August 22.

The bee population is under threat because of every day human activities. You might find them annoying because of their loud buzzing. But bees contribute to the environment more than we can ever imagine. 35 percent of edible crops are pollinated. Bees population is collapsing because of pesticides and parasites. If bees go down, they take humans along with them. The day is used to educate people on the importance of bees and spread awareness about the environment.

Bees need to be saved for survival. If the bee population collapses, the interdependent ecosystem will fall. If pollination stops, growth of crops and plans will go down significantly. That will take a toll on the herbivorous part of the animal kingdom. This will start a domino effect and one by one, everything will go down.

(The above story first appeared on LatestLY on Aug 16, 2019 05:29 PM IST. For more news and updates on politics, world, sports, entertainment and lifestyle, log on to our website latestly.com).