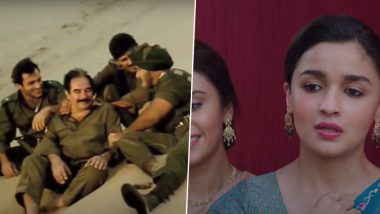 Indian Independence Day 2020 Song Videos: From "Ae Mere Watan Ke Logo" to "Ae Watan", "Watan Mere Abad Rahe Tu", people will be hearing all the patriotic songs in the run-up to India’s 74th Independence Day, which will fall on August 15, i.e. this Saturday. It was on this date India finally got rid of the clutches of British Raj, which spread over more than 200 years of unforgiving slavery. Well, India has progressed manifolds since 1947, and now, it even holds the true potential to be one of the top economies in the world. A lot has happened in the last 74 years of Independence. A lot of people sacrificed their lives to keep alive the true spirit of the nation both before and after independence. As we celebrate India’s 74 years of freedom, we at LatestLY, bring you some of the most patriotic and soulful songs that you will cherish to hear on this day of historical significance. Happy 74th Independence Day 2020 Greetings: WhatsApp Status Videos, Quotes, Facebook Captions, HD Images, Instagram Stories, Hike Stickers and Telegram Status to Share on 15th August.

The song "Des Mere Des" from the movie The Legend of Bhagat Singh depicts how young freedom fighters Bhagat Singh, Sukhdev, Rajguru and co. fought against the British for India’s freedom. The soulful song sung by AR Rahman and Sukhwinder Singh will melt your hearts.

The song "Bharat Ka Rehnewala Hoon" depicts actor Manoj Kumar speaking great things about the glorious Indian history. The heart-warming song sung by Mahendra Kapoor beautifully shows how illustrious has been India’s past has been, before and after the independence.

The title song "Chak De India" sung by Sukhwinder Singh is one of those patriotic songs which gets your heart filled with patriotism in no time. This song, which depicts Shah Rukh Khan and young Indian players preparing for the Hockey World Cup, will get your feet tapping all the time.

The song "Ae Watan" from the movie Raazi beautifully depicts the essence of how people sacrificed their lives for the unity, and security of our country. With lyrics penned by Gulzar, and sung by Sunidhi Chauhan, the song is a perfect tribute to soldiers who laid their downs post-independence.

Well, the heart-melting song "Sandese Aate Hai" from the movie Border is the most-loved patriotic songs of all times. It is ruling our hearts since 1997, and anything written in its praise would seem less only. Tip: Take a tissue/handkerchief while you hear this song. Independence Day 2020 Virtual Celebration Ideas: From Making Tricolour-Inspired Food to Singing Patriotic Hindi Songs, Here’s How You Can Celebrate Socially Distant 74th I-Day on 15th of August.

How can one miss out on one of the best songs sung by AR Rahman, when it comes to the list of patriotic songs? The song has the perfect vibes to match the feelings of Independence Day. The beautiful music and touching lyrics capture the true soul of India.

Sung by the legendary Mukesh, the song "Chhodo Kal Ki Baatien" from the movie Hum Hindustani will fill your hearts with compassion and love like anything. The emotional song from the 1960s, with even more heartfelt lyrics, truly speaks about the Indian spirit.

The song "Aao Bachho Tumhein Dikhaye Jhaanki Hindustan Ki" spectacularly encapsulates shows the true beauty, bravery, and pride of India. It takes you through geography, history, wildlife, etc. in only 4 minutes. The high-spirited references of India’s heroic history only add to its beauty. Independence Day 2020 Tattoo Ideas: From Indian Flag to 'Vande Mataram', Patriotic Tattoo Inspirations That Are Safe and Easy.

The song "Ae Mere Watan Ke Logo" sung by Lata Mangeshkar is one of the most soul-stirring songs of all times. It is also one of the most popular patriotic songs of all times. If any song that could better song #5 in this list, it is this. Beautiful lyrics, and add to it the even more melodious voice of Lata Ji, makes it a must-watch on such occasions of national importance.

Well, Independence Day reminds us of our brave history and struggle for Independence. But the day also pumps us up to our highest levels. It is one of those days when the religion, caste, colour etc. take a back seat, and there’s only a sense of patriotism, nationalism, and a United India exists. With August 15 nearing, we at LatestLY wish you and your family a very safe and ‘Happy Independence Day 2020’. We hope you loved hearing these songs on this Independence Day and would love to know if we missed out any tracks!

(The above story first appeared on LatestLY on Aug 14, 2020 08:10 PM IST. For more news and updates on politics, world, sports, entertainment and lifestyle, log on to our website latestly.com).