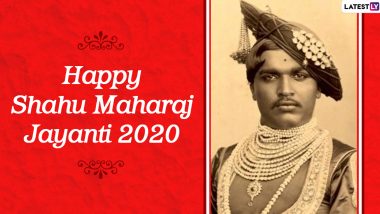 When is Rajarshi Shahu Maharaj Jayanti celebrated and what is its history?

What is the importance of Rajarshi Shahu Maharaj Jayanti?

Rajarshi Shahu Maharaj was a Maharaja who believed more in education and employment then caste and creed of an individual. He ensured that people of the poor community and lower castes get enough fair opportunities to earn a livelihood. He was very fond of reforming the education sector. For that, he opened many educational institutions and hostels for people of all the religions.

Another thing that he believed in was equality. In an incident that is popularly known as Vedokta controversy, Rajarshi Shahu Maharaj disbanded a group of priests who refused to chant hymns and perform rites for non-Brahmins. Instead, he chose to make a bold move and appointed a young Maratha as a scholar for the non-Brahmin community. Rajarshi Shahu Maharaj didn’t stop there. He also ensured that widow remarriage was legalised, and even took steps to stop child marriage.

He was a king, who broke stereotypes, restored humanity at so many levels, and that too at the time when these practices were considered very honourary and religious. People of all walks of life lived their lives satisfactorily and happily while Rajarshi Shahu Maharaj was a King.

As June 26 nears, we at Rajarshi Shahu Maharaj wish his soul rests in peace, and thank him enough for all his efforts to remove social ills and make society a better place to live in.

(The above story first appeared on LatestLY on Jun 26, 2020 10:55 AM IST. For more news and updates on politics, world, sports, entertainment and lifestyle, log on to our website latestly.com).