Telangana Formation Day 2021: 11 Interesting Facts You Need To Know About Telangana In Celebration of The Statehood Day

Telangana Formation Day is celebrated every year on June 2 in the state. This day is observed for the birth of a new state after its bifurcation of Andhra Pradesh. On Telangana's birthday, let's take a look at 11 interesting facts about the 29th state of India. 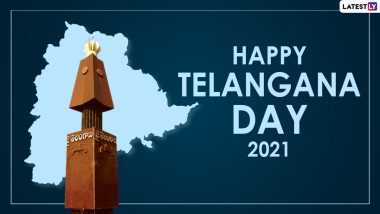 Formation Day is celebrated in all 30 districts of Telangana by hoisting the national flag. The day recognizes the struggles and strifes of the people of the state which helped them to gain independence from Andhra Pradesh. On Telangana's birthday, let's take a look at 11 interesting facts about the 29th  state of India.

During Formation Day Telangana awards its citizens for outstanding contribution in fields such as science, art, and literature and organises food festival cultural events across the state.

(The above story first appeared on LatestLY on Jun 01, 2021 11:27 AM IST. For more news and updates on politics, world, sports, entertainment and lifestyle, log on to our website latestly.com).