Thrissur Pooram is an annual temple festival held at the Vadakkunnathan temple in Kerala. It is a 36-hour-long annual festival that attracts huge crowds to the Thekkinkadu grounds to witness the festival. Thrissur Pooram falls on May 3. For the first time in 58 years, Thrissur Pooram has been cancelled due to the lockdown. 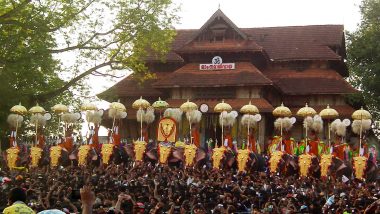 Thrissur Pooram is an annual Hindu festival celebrated in Kerala. It is a temple festival held at the Vadakkunnathan temple in Thrissur. It falls on the Pooram star in the month of Medam as per the Malayalam calendar. It is one of the biggest temple festivals in Kerala and quite famous. According to the Gregorian calendar, Thrissur Pooram falls on May 3. While the 200-year-old festival is celebrated with grandeur every year, this year Thrissur Pooram has been cancelled due to coronavirus lockdown. For the first time in 58 years, Thrissur Pooram has been cancelled. 1962 was the only year when this festival was cancelled due to the war with China. Thrissur Poornam organising committee met at Thrissur last month and decided to drop this year's Pooram due to the crisis situation. Indian Events & Festivals Calendar 2020: Know Dates of Champakulam Moolam Boat Race, Jaipur Literature Festival, Kala Ghoda & Other Events.

Thrissur Pooram is a 36-hour-long annual festival that attracts huge crowds to the Thekkinkadu grounds to witness the festival. The main attraction of the festival is The elephant parade, Panchavadyam (the orchestra of five instruments) and three-hour-long fireworks. Thrissur Poormam begins with the flag hoisting ceremony, followed by the first round of display of fireworks and display of caparisons. Then comes the main day of pooram, the main round of display of fireworks and ends with the farewell ceremony.

History and Significance of Thrissur Pooram

Raja Rama Varma, famously known as Sakthan Thampuran, the 17th-century ruler of the Kingdom of Cochin in Kerala introduced Thrissur Pooram as a grand festival. Prior to this it was a one-day festival held at Aarattupuzha in Thrissur and was known as Arattupuzha Pooram. It only used to be attended by temples in and around Thrissur. Once as the celebrations were in progress during heavy rains, a few temples participating in the Arattupuzha Pooram reached late and hence were denied entry. Temple authorities who were angered went to their King and narrated that they had to face embarrassment.

Elephants which are an integral part of the festivals attract a lot of people. However, they also attract the ire of animal lovers and activists for not taking good care of the jumbos. Thechikkottukavu Ramachandran, celebrity elephant is with a large fan following in Kerala has killed 13 people including a mahout other than three other elephants. Elaborate fireworks held at Thrissur Pooram have resulted in controversies. People are often advised to maintain a good distance from the place where the fireworks are lit.

(The above story first appeared on LatestLY on May 03, 2020 06:00 AM IST. For more news and updates on politics, world, sports, entertainment and lifestyle, log on to our website latestly.com).