It is a day that unites all animal lovers who want to work in betterment of these species. This day goes beyond just the love of domesticated animal but all of animal kingdom in general. Let us understand more about this day, its history, significance and celebration. 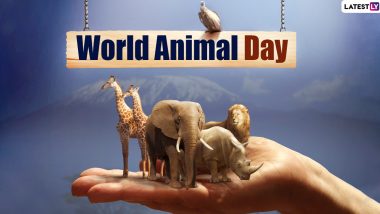 Happy World Animal Day! World Animal Day is marked every year on October 4. It is an international day of action for animal rights and welfare. The idea behind the celebration is to improve the welfare standards for animals around the globe. It is a day that unites all animal lovers who want to work in betterment of these species. This day goes beyond just the love of domesticated animal but all of animal kingdom in general. Let us understand more about this day, its history, significance and celebration. What Do You If You Witness Animal Cruelty? Steps to Take if You Encounter Animal Abuse.

As human beings, the social animals. we have established ourselves as the superior race over animals. As we encroach over spaces and forest cover, we make the survival of animal habitat difficult. But we need to remember this world is a shared space for all humans and animals. There needs to be awareness about this at every step, which is exactly why we see the observance of this day. Animal Cruelty: Modi Govt May Do Away With Low Penalty of Rs 50 For Torturing Animals, Mulls Bringing Stricter Law.

World Animal Day dates back to the 1920s. It was originated by cynologist Heinrich Zimmermann. He organized the first World Animal Day on 24 March 1925 at the Sport Palace in Berlin, Germany. The event day was shifted to October 4 in 1929 to align with the feast day of Saint Francis of Assisi, a patron saint of ecology. In the early start, the event was observed in countries of Germany, Austria, Switzerland, and Czechoslovakia. Year after year, Zimmermann worked tirelessly on the promotion of World Animal Day. In May 1931, International Animal Protection Congress in Florence Italy, accepted the resolution to observe World Animal Day universally.

The mission of this celebration is "to raise the status of animals in order to improve welfare standards around the globe. Building the celebration of World Animal Day unites the animal welfare movement, mobilising it into a global force to make the world a better place for all animals." This day is celebrated in different ways in every country, irrespective of nationality, religion, faith or political ideology. The larger aspect is to create a "world where animal where animals are always recognised as sentient beings and full regard is always paid to their welfare."

(The above story first appeared on LatestLY on Oct 03, 2020 07:00 PM IST. For more news and updates on politics, world, sports, entertainment and lifestyle, log on to our website latestly.com).