World Bleeding Disorder Awareness Day 2021 Theme & Significance: Here is All That You Should Know About Hemophilia 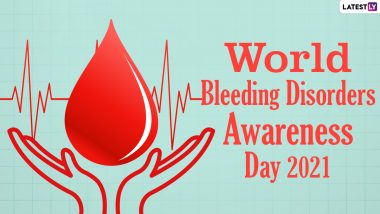 World Bleeding Disorder Awareness Day, better known as World Haemophila Day, is an international awareness day for hemophilia and other bleeding disorders. It is held annually on April 17, the date of the birthday of Frank Schnabel, founder of the World Federation of Hemophilia. The observation of this event was started by the World Federation of Haemophilia (WHF). The event provides an opportunity to discuss the disease with friends, family, colleagues, etc, and to support the patients suffering from Haemophilia disease.

World Bleeding Disorder Awareness Day is celebrated annually on April 17. The theme for World Hemophilia Day 2021 is 'Adapting to Change - Sustaining Care in a New World'. It is usually celebrated for 5 days in which every possible effort is made to spread awareness about the disease and the related disorders. World Haemophilia Day was first celebrated in the year 1989.

Haemophilia was first discovered in the 10th century, when people started to take a serious interest, especially in males, who after minor injuries due to bleeding died. At that time this disease was known as Abulcasis. But, due to limited technology, it was not cured. Dr. John Conrad Otto of Philadelphia in 1803 began to study people called "bleeders" and said that it is a hereditary illness that passes on to males by their mothers. In 1937, hemophilia genetic disorder was divided into two types: A and B. But no proper treatment was invented till that time. April 2021 Holidays Calendar With Festivals & Events.

In India, on this day various events are organised by groups of people in several states. Indian Haemophilia Foundation located in New Delhi in association with the Ministry of Health and Family Welfare observes this day by providing medical facilities to the needy and increases awareness about this disease.

World Bleeding Disorder Awareness Day 2021 is the 31st year in which world Haemophilia day will be celebrated. The World Federation of Haemophilia is focusing on spreading awareness about this bleeding disorder and finding out better ways to treat people with this disease and care for them. You can play your part by spreading information and details about hemophilia by sharing posters and important messages from WHF official website.

(The above story first appeared on LatestLY on Apr 17, 2021 08:04 AM IST. For more news and updates on politics, world, sports, entertainment and lifestyle, log on to our website latestly.com).