World Habitat Day 2020 Date And Theme: Know The History And Significance of the Observance That Highlights The Right of Adequate Shelter

World Habitat Day is marked on the 1st Monday of October annually, and is recognised by the UN to reflect on the situation of towns and cities, and on the basic right of all to adequate shelter. World Habitat Day 2020 falls on Oct 5. It is intended to remind the world that everyone has the power to shape the future of our surroundings. 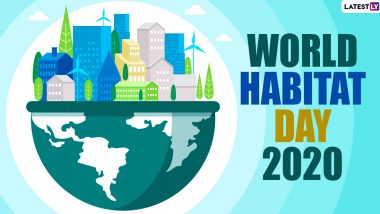 World Habitat Day is marked on the first Monday of October each year, and is recognised by the United Nations to reflect on the situation of towns and cities, and on the basic right of all to adequate shelter. World Habitat Day 2020 falls on October 5. It is intended to remind the world that everyone has the power and responsibility to shape the future of our surroundings. World Habitat Day 2020 theme is 'Housing For All — A Better Urban Future'. An estimated 1.8 billion people live in slums in our cities worldwide before the pandemic began and some three billion people lack basic hand-washing facilities. This means millions of people are more likely to experience poor health due to the absence of basic services and exposure to multiple socio-economic and environmental hazards. 2nd Sero Survey Results: 87 Million Likely Exposed to COVID-19 in India, 1 in 15 Have Antibodies

The United Nations General Assembly decided that the first Monday of October should be celebrated as World Habitat Day in many countries around the world. Another important factor is that as the world's climate continues to change, there is an ever-increasing risk of natural disasters. This risk is most significant in the Caribbean Region and Central America and countries like Haiti, Nicaragua, Honduras, El Salvador and Bolivia. There are higher levels of poverty in cities and places that are exceptionally vulnerable due to their population density and diversity. Wildlife Population in World Declined by 68% Since 1970, Says WWF's Living Planet 2020 Report.

The UN’s World Habitat Day was first celebrated in 1986 with the theme “Shelter is My Right”. An important highlight of the day is the “Habitat Scroll of Honour” award, which was launched by the United Nations Human Settlements Programme (UNHSP) in 1989. This year the underlying motto is to tell highlight that housing is a human right and a catalyst for all other fundamental rights. It is the only way to ensure the “Right to the City for All”.

(The above story first appeared on LatestLY on Oct 05, 2020 06:50 AM IST. For more news and updates on politics, world, sports, entertainment and lifestyle, log on to our website latestly.com).