How Many Times Has Oktoberfest Been Cancelled? From World Wars to Coronavirus, Here’s All The Time Germany's Beer Festival In Munich Had To Be Called Off!

Held annually in Munich, Germany, it was announced yesterday that Oktoberfest 2020 has been cancelled this year, given the situation of COVID 19 spread. While the revellers and local vendors would, of course, be disappointed, it is not the first time the beer festival celebrations have taken a break. 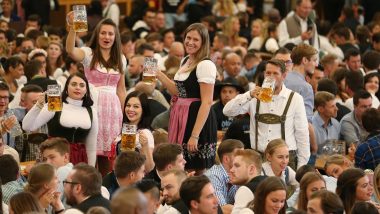 The Coronavirus pandemic has cancelled major events, including sports tournaments, film festivals, award functions around the world. Adding to the list is the world's biggest beer festival, the Oktoberfest. Held annually in Munich, Germany, it was announced yesterday that Oktoberfest 2020 has been cancelled this year, given the situation of COVID 19 spread. While the revellers and local vendors would, of course, be disappointed, it is not the first time the beer festival celebrations have taken a break.

Oktoberfest is an annual festival held in Munich, for over a period of two weeks. The festival dates back to 1810, when it was first organised as a celebration of the marriage of the crown prince of Bavaria, who later became King Louis I, to Princess Therese von Sachsen-Hildburghausen. It saw the organisation of a lot of horse races back then. By 1818, food and drink stalls were added and they gradually became big halls in the 20th century. Over the years, the popularity of this event grew as a beer festival so much so, it sees over 6 million visitors every year. Oktoberfest 2020 is not the first time, the festival is getting cancelled. Check how bombs, wars and cholera have stopped this annual event. Pride Parade 2020 Cancelled! NYC Cancels LGBTQ Pride March and Puerto Rican Day Parade for the First Time in History Due to COVID-19 Spread.

In the year 1813, Napolean and his army were caught in battles with Bavaria. Napolean did not win the battle but the hostilities were too much. The Oktoberfest had to be cancelled just four years after it had begun.

In the year 1854, a cholera epidemic claimed over 3,000 lives in Munich. A lot more people died around Bavaria. A German industry exhibition opened in Munich in July 1854, which saw over 5,000 visitors on the very first day. The outbreak of cholera rose and sufferers were those living in the south of the city, by a creek. The epidemic soon flowed through the city and the number of victims continued to rise. By the summer of 1854, there were around 15,000 cases of cholera, leading to 7,730 deaths. No way the festival could be held then.

In 1866, Bavaria was part of the Austro-Prussian war, siding with Austria. And in the year 1873, cholera returned in Munich. So the celebrations of Oktoberfest were cancelled. Even during the WWI from 1914 to 1918, the event was canned.

World War I left a terrible situation of inflation. The government was in debt. Munich was at its peak of hyperinflation. Income holders faced huge financial crisis compared to the state and businesses. The money troubles and lack of sources to feed their own livelihood, the festive event was cancelled.

World War II was another terrible span for Germany. Instead of the Oktoberfest, there was a small 'fall festival' organised.

After the end of World War II, Oktoberfest continued and it is the first time since then, the event has been cancelled this year because of COVID 19. Things may or may not get normal until the end of September and hence it was decided to not hold this event. The Bavarian Minister-President Markus Soeder admitted that the announcement of cancellation hurts, but they had to do it.

(The above story first appeared on LatestLY on Apr 22, 2020 04:09 PM IST. For more news and updates on politics, world, sports, entertainment and lifestyle, log on to our website latestly.com).