Around 30 per cent of the grain content of the beer will be cornflakes and 70 per cent wheat. 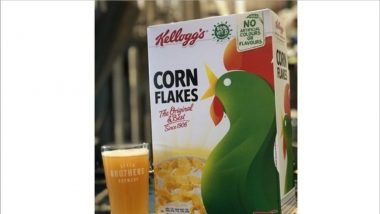 To cut down on food wastage, giant cereal brand, Kellogg’s has teamed up with Salford-based brewery Seven Bro7hers to create a beer made with cornflakes that would otherwise be a waste product. The beer is called Throw Away IPA and is made by a brewery in Manchester. It uses upcycled cornflakes which are too big, small or overcooked to sell in a box of cereal. This ensures that customers no longer have to worry about what happens to leftover food. Carlsberg Will Use Glue to Stick 6-Pack Beer Cans to Reduce Plastic Usage.

The brewery used around 60kg of rejected cornflakes for the beer and 10p from each can purchased will be donated to food distribution charity FareShare. Kellogg’s has already reduced its food wastage by 12.5% this year. Corporate social responsibility manager for Kellogg’s UK, Kate Prince said, “Kellogg’s is always exploring different and sustainable ways to reduce food waste in its factories. So, it is great to be involved in such a fun initiative with a local supplier.” She further said, “Kellogg’s is working hard to eliminate food waste in our manufacturing processes and give our consumers the wholesome products they love with minimum impact on the planet.”

Around 30 per cent of the grain content of the beer will be cornflakes and 70 per cent wheat. It is added during the mash process and reportedly sweetens the taste. Alison Watson from Seven Brothers Brewery said, “Seven Brothers Brewery is delighted to be working with Kellogg’s on a project which uses edible but not-sellable cereal. We plan to create three beers including a Hoppy IPA which will be launched this month and sold in our Ancoats bar and the Dockyar, MediaCityUK.”

(The above story first appeared on LatestLY on Dec 07, 2018 07:00 PM IST. For more news and updates on politics, world, sports, entertainment and lifestyle, log on to our website latestly.com).