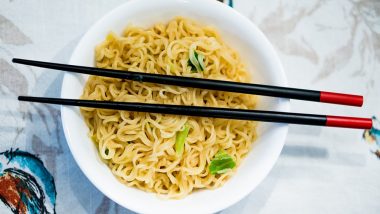 Beijing, August 15: A restaurant, specialising beef dishes, had drawn wrath of social media users on Weibo over its policy to weigh customers before taking food order. The eatery, based in central Changsha town, had enacted the policy earlier this month after President Xi Jinping called for a nationwide campaign to prevent wastage of food. Following an outrage, it issued an apology on Saturday.

Customers entering the Changsha-based restaurant, popular for its beef delicacies, were asked to stand on a weighing scale and feed their data on an application that would suggest what kind of food dishes would be apt as per their body requirement. Delhi's Rajouri Garden Restaurant Served Closure Notice for Flouting Social Distancing Norms and Serving Hookah.

The customers were recommended to order food based on their caloric values and whether the dishes would be suitable as per their body weight. It also put up banners in the dining room saying "be thrifty and diligent, promote empty plates" and "operation empty plate".

After the overzealous campaign by the restaurant irked some customers, a number of hashtags were used on the Chinese social media platforms by the customers to mark their dissent. A number of food-eaters were offended and felt they were body-shamed at the restaurant.

Taking cognisance of the complaints on social media, the restaurant issued a letter of apology. In a statement released by the eatery, it admitted that it had wrongly interpreted President Xi's appeal to minimise food waste.

"Our original intentions were to advocate stopping waste and ordering food in a healthy way. We never forced customers to weigh themselves," it said, adding that it would no longer weigh any customer entering into the restaurant.

(The above story first appeared on LatestLY on Aug 15, 2020 05:11 PM IST. For more news and updates on politics, world, sports, entertainment and lifestyle, log on to our website latestly.com).