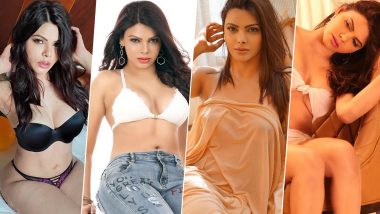 Happy Birthday, Sherlyn Chopra! Bold and beautiful actress Sherlyn Chopra has created a special identity of her own in the industry. While her Instagram is so hot that it is enough to make you sweat, she also knows how to flaunt her boldness, right! From acting with Rani Mukerji and Shahid Kapoor in the movie 'Dil Bole Hadippa', to directing a movie, Sherlyn Chopra has come a long way. For those who don't know, Sherlyn Chopra is the only Bollywood actress and model to become the first Indian woman to pose nude for Playboy magazine In July 2012. However, a bold woman is always followed by controversies in this world and so has been the case with Sherlyn Chopra for the longest of time.

Right from the time, Sherlyn Chopra worked in Rupesh Paul's XXX type film Kamasutra that was made in 3D type, Sherlyn Chopra has not left the headlines. And now, in the age of Instagram, if follow her, you will nude, hot and sexy videos and pictures popping up on your screen. Apart from this, MTV Splitvilla actress had recently even made a big announcement where she confessed that she had earlier slept with people for money. In some of her latest tweets, the Bollywood displayed her dirty laundry and said that she was contacted many times for paid sex and she agreed for it because she wanted easy bucks.

She tweeted, "The confessions of 'just a girl'-Dear all, before I proceed, let me make it very clear that the intent of sharing the following confessions...is not to create public sympathy OR to raise eyebrows OR to project myself as a 'bad girl gone good'....itz just to state a few facts.......I've been receiving contact numbers on my twitter handle n on contact@sherlynchopra.com of those who wish 2 enjoy.....physical intimacy with me at a price....In the past, on various occasions, I've had sex 4 money...out of all my past experiences of paid sex, there's not a single one that I remember."(sic)

Sherlyn Chopra Shared a Snipped of Her Film Dirty Love

Sherlyn Chopra Nude In a Bathtub

Sherlyn Chopra had also made a very controversial comments. She said that she is crazy about Vidya Balan and that she wants to do a passionate scene with her. She further stressed saying that if Vidya Balan is listening to her, then she wants to tell her that she can take better care of Vidya Balan than Siddhartha.

(The above story first appeared on LatestLY on Feb 11, 2020 06:00 PM IST. For more news and updates on politics, world, sports, entertainment and lifestyle, log on to our website latestly.com).