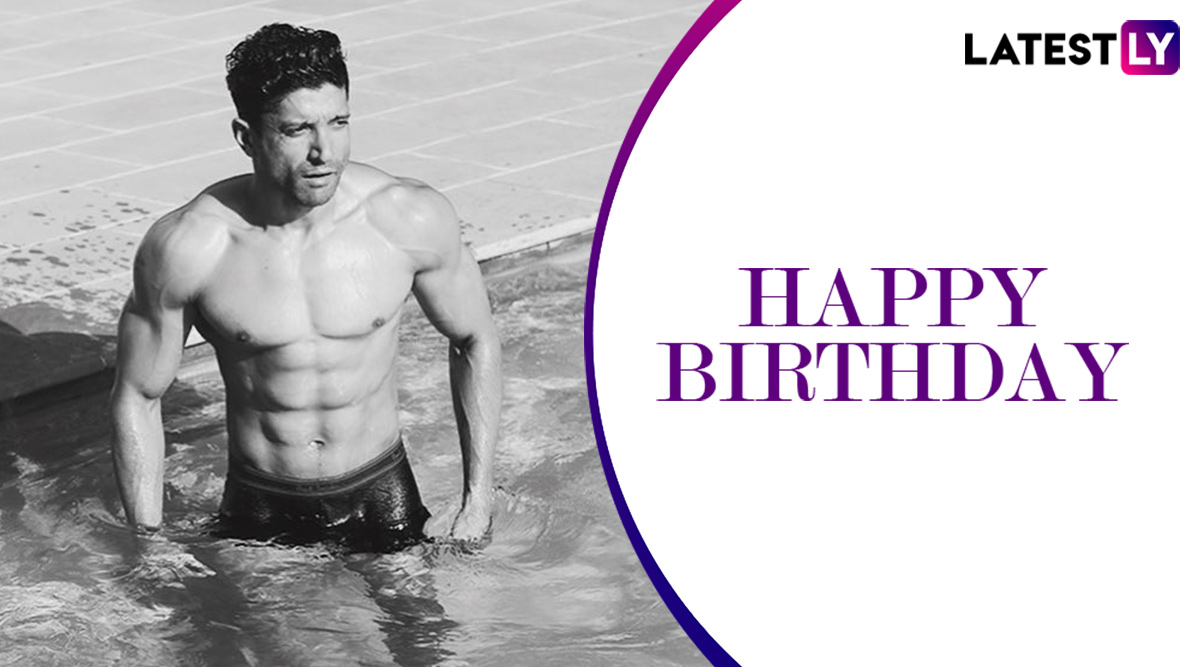 Farhan Akhtar turns 46 on January 9, 2020. He is one of the most talented personalities in the Indian film industry. Farhan, son of famous screenwriters Javed Akhtar and Honey Irani boasts of an envious career profile in Bollywood. He is a director, a screenwriter, an actor, a playback singer, a producer, and also a television host. Farhan Akhtar made his directorial debut with Dil Chahta Hai, which released in the year 2001. While his first movie as an actor was Rock On that hit theatres in the year 2008. Apart from his prolific work in the film industry, Farhan is also popular for his well-maintained body. In fact, people began noticing his steely abs from 2011 movie Zindagi Na Milegi Dobara, but left everyone starstruck with his hardcore chiselled core in Rakeysh Omprakash Mehra's 2013 movie Bhaag Milkha Bhaag. On occasion of Farhan Akhtar's birthday, let us explore fitness secret behind Bollywood actor's lean muscular physique. Toofan: Farhan Akhtar’s Fierce, Bulked Up Avatar as a Boxer Is Mighty-Impressive.

Recently, Farhan Akhtar released the first look of his upcoming movie Toofan, where he will be donning the role of a national level boxer. The film is scheduled to release in October, 2020 and Bollywood actor's ripped body has already started attracting eyeballs. Be it singing, directing, acting or fitness, Farhan Akhtar does everything with full dedication and hard work which pays him with a good result in the end. Now without any further delay, let us speak about Farhan Akhtar's workout and diet. Exclusive: Farhan Akhtar Was Told by an Actor to Give Away the Script of Dil Chahta Hai (Watch Video)

Farhan Akhtar trains all his body parts separately in order to get a proper muscle definition. Even in his forties, he is quite agile and the reason behind it is the way he carries out his workout. The Rock On actor does not hit the gym to pump iron, but he ensures that he includes all other sorts of exercises to maintain body balance, increase endurance and keep him active. The Bollywood star does 22km of cycling every day and also loves to play volleyball thrice in a week. Now he is mostly concentrating on his boxing training in order to play the role of boxer in Toofan with perfection.

It’s impossible to do this and not have the ‘Rocky’ theme playing in your head. All these years later.. the music by Bill Conti just nails it. #ToofanInTheMaking #SlyStallone #boxerlife #cinemamagic #fitnessgoals #morecore #hardcore #abworkout #skillset 🥊 @drewnealpt 🏋🏾‍♀️ @samir_jaura

Farhan Akhtar's fitness trainer Samir Jaura revealed in an interview with Times of India that it is very important to eat a balanced meal when a person is under vigorous training. Farhan Akhtar eats around six to eight meals every day with a proper proportion of macros, that is protein, carbohydrates and fats. Jaura who has trained Farhan Akhtar for Bhaag Milkha Bhaag, revealed that Farhan mostly eats sweet potatoes for pre-workout which works as good fuel for an intense workout session. The actor believes in healthy food eating habit and always carry home-cooked food with him while going out for a shoot. And it mostly includes chicken or fish for protein and quinoa for healthy carbs.

Farhan Akhtar's fitness in the forties should give a major fitness goal to many youngsters. He is indeed a fitness freak and works really hard to maintain his aesthetic body. We wish Farhan Akhtar a very Happy Birthday and all the best for his upcoming movie Toofan.