Man Held For Drunk Driving Discovers His Stomach Produces Alcohol; Know All About Auto-Brewery Syndrome and Other Instances of People Being Diagnosed Of It 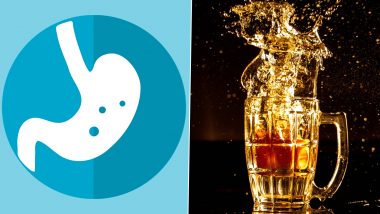 Danny Giannotto, a 49-year-old Matawan resident in New Jersey was pulled over by the cops for drunk driving after noticing his suspicious driving. On blowing into the breathalyzer, he tested three times over the limit. But Danny claimed that he had not consumed alcohol and did not know why his results showed positive. Thereafter, a month later, he decided to undergo some tests at a hospital to find out more. Reports showed that his stomach naturally produced alcohol in a rare condition called Auto-Brewery Syndrome (ABS). While beer belly is a common term used for people who have big tummy due to calories gained from drinking beer, people jokingly refer to this condition as 'beer belly'. Man’s Stomach Automatically Creates Alcohol Due to a Bizarre Health Condition! What Is Auto Brewery Syndrome?

Talking about the condition Danny was quoted as saying, "I couldn't believe it when they arrested me. I was in shock and I tried to explain but it fell on deaf ears. I was mad and frustrated because they didn't believe me. People don't usually believe it. They do think it's funny, they say I'm a cheap date and I get a lot of jokes but someone going through it doesn't find it funny at all."

Know All About Auto-Brewery Syndrome (ABS)

For people with this rare condition, their stomach turns carbohydrates into alcohol. The fermenting fungi or bacteria in the gut produce ethanol and can cause the person to show signs of drunkenness. In the case of Danny, a slice of cake can leave him four times over the alcohol limit. The condition, also known as gut fermentation syndrome, can also occur in healthy people but is more common in patients with diabetes, obesity or Crohn’s disease. How to Avoid Beer Belly and Weight Gain While Making the Best of Happy Hours.

Auto-Brewery Syndrome made headlines in 2014, when the driver of a truck that spilt 11,000 salmon onto McKenzie River Highway outside of Eugene, claimed to have the condition. In 2015, a New York woman was charged with driving under the influence of alcohol after her blood-alcohol level was more than four times the legal limit. A judge dismissed her case after being shown evidence that she had an auto-brewery syndrome. Earlier this year, a woman was denied a liver transplant because she had alcohol in her system although she did not drink. She was later found out to behaving 'auto-brewery syndrome.'

(The above story first appeared on LatestLY on Jul 12, 2020 08:23 PM IST. For more news and updates on politics, world, sports, entertainment and lifestyle, log on to our website latestly.com).