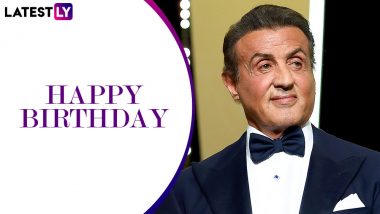 Most of us must have grown up seeing Sylvester Stallone in action movies, especially his Rocky movie series where he played the role of Rocky Balboa. The 'Italian Stallion' Sylvester is as known for his hardcore physique as his superstar looks. Today (July 6, 2019) he turns 73 years old but that doesn't make any difference as age is just a number for the Rambo star. On the occasion of Sylvester Stallone birthday, let us take some fitness inspiration from the fit superstar. Here's looking at his diet and fitness routine. Rambo: Last Blood Teaser Trailer: Sylvester Stallone Is Back for One Final Round of Bullets and Vengeance – Watch Video.

Sylvester Stallone has been known for hit blockbusters like Rocky 1, Rocky 2 and Rock 4. His buffed-up look in Rambo First Blood and Rocky First Blood Part 2 was also quite appreciated. He was also seen relatively recently in super fit avatar in The Expendables series. What truly makes Stallone a fitness icon is his fitness even at this age.

Just like Arnold Schwarzenegger, Sylvester Stallone has also written a book on fitness called Sly Moves. In his book, he recommends drinking water and hydrating as the most important step to fitness. Stallone says, “Eight glasses. Ten glasses. A gallon. Lake Michigan".

He further went on to describe that water detoxifies the body and also helps reduce hunger. Regarding diet, Stallone states that no matter what diet one follows, it's all about eating a sustainable portion as per the body requirement. Furthermore, Rambo star has also revealed some interesting facts like chewing sugar-free gum and eating a banana to help curb hunger.

Sylvester Stallone train fore strength where his aim is to keep fat at a minimum level with a good amount of muscle mass. His training at this age is enough to challenge a young bodybuilder's. Rocky star trains his core, leg muscles, deltoids and trapezius muscles effectively. His training includes compound movements like stiff deadlift, squat, military press as well as isolation exercises like bicep curl by a barbell, side lateral raises, concentration curl, etc.

Leaving to start Rambo in about five days!! Even though I hate it , all Serious and balanced strength starts with the abs…Fire in the gut! @rambomovie @slystalloneshop @bradsiskind @gunnarfitness

Sometimes you just have to hang onto your life by your fingertips and hope for the best !! @gunnarfitness @bradsiskind #cliffhanger @rambomovie

Getting ready for Rambo, Totally immersed in it! 100%. welcome to the jungle. @slystalloneshop #rambo @athleanx #healthylifestyle #mexico #heart @bradsiskind @gunnarfitness

Getting ready for Rambo Also just because you’ve REACHED a certain age doesn’t mean you have to FEEL that age! Keep pumping, keep punching! @bradsiskind @xdfitofficial

There's also good news for all Stallone fans; he will be soon seen in action in his upcoming movie Rambo 5: Last Blood, which is scheduled to premiere on Sep 20, 2019.  Sly Stallone has indeed struggled a lot for achieving heights in his career. Many of you must be unaware that he even sold his pet dog before getting the opportunity to star in Rocky 1 where he was signed for US$ 35,000.

One of his dialogues from Rocky 6 is a true motivation for all of us, where Rocky Balboa says: "The world ain't all sunshine and rainbows. It's a very mean and nasty place, and I don't care how tough you are, it will beat you to your knees and keep you there permanently if you let it. You, me, or nobody is gonna hit as hard as life. But it ain't about how hard you hit. It's about how hard you can get hit and keep moving forward; how much you can take and keep moving forward. That's how winning is done!" Youngsters who believe in fitness in the good old fashioned way should definitely look up to Sylvester Stallone for inspiration.

(The above story first appeared on LatestLY on Jul 06, 2019 09:00 AM IST. For more news and updates on politics, world, sports, entertainment and lifestyle, log on to our website latestly.com).