Founded by Jessica Santana and Evin Floyd Robinson, America on Tech (AOT) is a non-profit organization that aims to prepare the next generation of technology leaders. By doing this, AOT decreases the economic and racial wealth gap in underestimated communities. 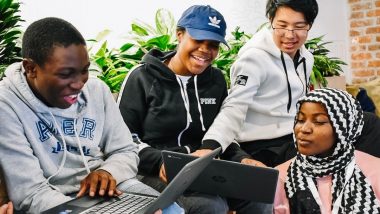 A career in tech may be rewarding, but not everyone who wants to pursue one can do so. America on Tech wants to change the game.

Founded by Jessica Santana and Evin Floyd Robinson, America on Tech (AOT) is a non-profit organization that aims to prepare the next generation of technology leaders. By doing this, AOT decreases the economic and racial wealth gap in underestimated communities.

As of writing, AOT has served 3,500 students. The organization has also launched offices in New York and Los Angeles.

“When we think about the young people we serve, we know that when given the resources to succeed, they thrive and not only create promising career pathways for themselves, but for others in their communities. In this way, AOT seeks to foster systemic change by increasing the presence of low-income, BIPOC (Black, Indigenous People of Color) youth in high-income tech careers,” the founders stated.

Interestingly, AOT’s founders were once the students they now serve. Santana and Robinson were first-generation college graduates who worked in the tech industry.

The concept for AOT started when Santana and Robinson were working in the said industry. They noticed that there were very few people like them in the industry. At that moment, they knew that something must be done to change the face of the tech sector.

As people of color, Santana and Robinson knew what it was like to not have the resources to thrive in their chosen fields. Like most, if not every person of color, they had to work so hard to pursue careers in tech.

Therefore, they made it their life mission to help students who cannot readily pursue careers in tech. Using their skills and experience, Santana and Robinson founded AOT.

Santana and Robinson are two of the most effective leaders in this space. In fact, they were featured on the Forbes 30 Under 30 list, selected as Robin Hood Foundation’s Inaugural Power Fund Leaders, and recognized by New York City and New York State non-profit media for their work with AOT.

Currently, the duo is busy with the 2021 Innovators & Disruptors Awards & Ceremony. The event will be virtually held on November 18, 2021. It will be hosted by NBC anchor Morgan Radford and will honor big names such as Nick Tran, Head of Global Marketing at TikTok and Felicia Mayo, Chief Talent, Diversity & Culture Officer at Nike.

All proceeds will go towards supporting AOT's student programs.

“We hope to leave behind a generation that got access to the things they deserve. This is why we are going to great lengths to help students across the country,” the duo concluded.