In today’s Middle Eastern society, Layal is a rare example of how the view of women in work is being seen. Many women find it difficult when looking for work as they need to challenge the cultural views entrenched in their society that women should not be in the business world. 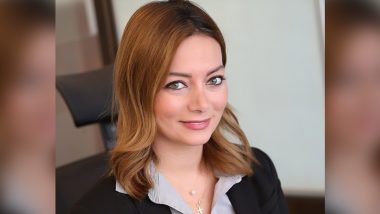 Layal Haykal has paved the way for Middle Eastern women to build successful careers in finance. Layal has worked tirelessly to become a success through her own tenacity and inner strength in a male-dominated world.

It is typical for Middle Eastern women like Layal to be treated not as important as male workers, expected not to work in business at all. These views come from traditional practices, religion, and their culture. Layal has challenged the way Lebanese women are being viewed in the finance industry.

Through her outstanding levels of professionalism and a thirst for learning, Layal Haykal has built a career in finance and achieved high standing in the financial community within the Middle East. This is a testament to her character and the way in which she conducts her business. She is an inspiration to all Middle Eastern women in the modern world.

Layal has worked for Euromena Funds, an international company, developing and implementing strategies and policies through her highly rated communication and managerial abilities. She made several successful investments for this company and was able to positively influence the company’s tax efficiency policies. She received much praise from partnering businesses and associates that was very well-deserved.

In today’s Middle Eastern society, Layal is a rare example of how the view of women in work is being seen. Many women find it difficult when looking for work as they need to challenge the cultural views entrenched in their society that women should not be in the business world.

In such a society, women do not have the right to be treated in the working world on a par with men. Even though this is the 21st century, gender bias exists to a large extent in certain parts of the world. As the entire world advances in equality and technology, many Middle Eastern women face exploitation, violence, and subjugation.

Traditional social and cultural norms mean that women should not apply for jobs and should act in a certain way. Many women do not wish to conform this way and are challenging the image that women have within their society. There is certainly a need for greater and faster change. Women lack being able to think for themselves and make their own decisions, usually relying on their husbands for everything. The women are often seen as submissive and inferior to their male spouses.

Particularly in Lebanon, with the decline of the Lebanese Lira and the unstable financial markets, Layal Haykal and women like her are paving the way for others to have influential and prominent, successful roles in the world of finance and business.

Throughout all this national monetary crisis and turbulence, Layal has had responsibility for the finances of the whole Euromena Group of companies. Despite the local currency crashing and the country diving into poverty, she managed to continue working in the same professional, hard-working manner that brought her to the position and respect she held. This is a testament to her strength of character and professional attitude to business.

Layal has also influenced Social and Environmental policies by carrying out research and reporting to the institutions responsible for the development of finance. The prominent level of respect she has gained within the world of finance is both well-deserved and hard-fought for.

Layal has been responsible for the migration of the entire 18 companies within the Euromena companies from an older, inefficient software system to an improved system. She overcame many technical difficulties and proved her worth with this implementation of this new software system. She regularly teaches, has meetings, and still learns new techniques and ideas from others as her daily working routine. She takes her personal and professional development seriously and continues to improve the way she works every day.

Layal is a hard-working businesswoman and is successful in her field. She has become one of the leading women in business in Lebanon and is a prominent role model. She has also found time to be a mother and has shown the Middle Eastern communities how the role of parent and businessperson can be managed successfully.

Living in a gender-biased world, Layal is able to overcome conventions to make her mark through her own talent, skill, and professionality. She has become a shining example of what is possible to achieve through hard work. She is dedicated to her business life, and the respect she has gained and the trust that she has been given prove how highly Layal should be regarded.