It is often said that the best measure of a person’s character is not their actions during times of comfort, but how they act and persevere during times of difficulty. Meet Marquis Jenkins: a great example of taking your adversities and turning them into achievements, by learning from your mistakes and working with what you have. 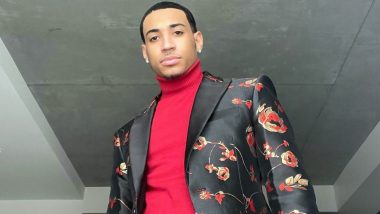 It is often said that the best measure of a person’s character is not their actions during times of comfort, but how they act and persevere during times of difficulty. Meet Marquis Jenkins: a great example of taking your adversities and turning them into achievements, by learning from your mistakes and working with what you have. He seized every opportunity that was put in front of him to build a successful business from the ground up.

Marquis was born and raised in Detroit, Michigan. His first employment was at McDonald’s where he started off taking orders in the drive through. Due to a hearing impairment he struggled in his work, but did not allow this to deter him from succeeding. He made the job work for him and requested to be moved to making sandwiches where he excelled.

“I grew to love my job because I was able to make money to provide for myself, and when you learn to like what you’re doing, you’ll make it work” says Marquis.

This is only the beginning of Marquis’ determination to turn every difficult situation into a learning lesson, and then into a success story.

Marquis went to Western Michigan University in Kalamazoo, where he majored in business management. Marquis says because of the job he had at McDonald’s he was motivated to start his own business. He completed three years of school but in his fourth year he was presented with the opportunity to join network marketing, which would change not only his mindset, but the course of his life.

Marquis worked hard to build his business and a team of individuals who have found success under his mentorship. To date, his business called “Get Active” employs over 3000 people all across the United States. His mission is to show people that it is possible to be successful without a college degree or without working a full time job, by giving them the skills and mentorship required to reach their full potential.

“We teach people a skillset that can help them become financially independent. It takes time to learn any new skill or system, but once you learn it, it's kind of like riding a bike, you’re not going to forget how it works. I pride myself on being able to work with anyone, anywhere, doesn’t matter who you are, what part of the world you’re in, everyone can be included,” says Marquis.

Building a business in network marketing to the horizons that Marquis has achieved is no small feat, and does not come without its fair share of trials. Marquis experienced a large loss of his team, which he says was in part due to losing focus on what brought the momentum for his business in the first place. He took this setback as a learning lesson and came out on top - building his team back to exceed where it was in a matter of days.

“What I found out was if you want to keep a business going, you have to learn how to keep your customer and your team satisfied. It’s important to create strong relationships with people on your team, people who you’re working with, almost like a family atmosphere. Your network is the foundation of your business at the end of the day, and the setback I faced helped me to go back and build a stronger foundation to bring longevity to Get Active,”  says Marquis.

Get Active is continuing to grow with Marquis at the helm, and he hopes to bring this opportunity to as many people as possible. He recognizes that he himself early on didn’t consider the possibility of entrepreneurship because it wasn’t something that he was exposed to - all he knew was the conventional way of getting an education to get a job.

When discussing how his entire mindset shifted when he was introduced to the idea of becoming an entrepreneur and being his own boss, Marquis says:

“I used to sell candy at school and I was the person who was walking up and down the street with the lawnmower, the snow shovels, always looking for an opportunity to make money, but I always thought I was going to be that person that graduated and got the job, because that's all that I was ever exposed to - working a job to earn a living. But once I was introduced to network marketing one thing just led to another and it was like a whole different mindset that I was introduced to.”

Being the network marketing tycoon that he is today, Marquis is more than happy to share his best advice with aspiring entrepreneurs:

Become the fire! “A Lot of people in the network marketing industry want to stay close to the fire - they want to stay around that environment and people who are doing well and have found success. And I agree with that. But the best thing to do is to learn how to become the fire. You want to learn how to become the person that people gravitate towards. Be the person that creates the momentum, not just the person who rides the wave after the momentum has already started.”

Fall in love with what people hate to do. “...so you can live the lifestyle that people dream to live. You want to be up learning while people are sleeping to stay one step ahead of the game.”

Marquis has turned countless trials into triumphs and when you’re going through adversity in business or in life, think on his advice:

“In tough times, remember this is just a pullback, not a reversal. A lot of people going through some tough times in their business may think of it as a loss. You hear it all the time. But it's not a loss, it's really a lesson.”

(The above story first appeared on LatestLY on May 06, 2021 03:47 PM IST. For more news and updates on politics, world, sports, entertainment and lifestyle, log on to our website latestly.com).