Milou Sky is a quartet from Pennsylvania that have managed to become quite the social media influencers in the past year. They create great music that really stands out with its unique appeal and great ideas. 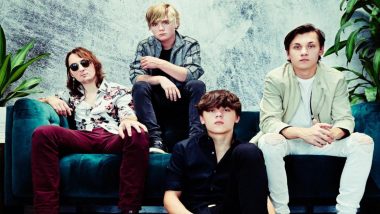 Milou Sky is a quartet from Pennsylvania that have managed to become quite the social media influencers in the past year. They create great music that really stands out with its unique appeal and great ideas. They acquired a lot of fame on social media, with 2 million streams on SoudCloud and roughly 100k followers on Instagram. They are inspired by other artists, however their approach is genuine, unique and it really helps push the boundaries to deliver something distinctive and different.

The band was created by Ryan Beckett and Zach Ninfo who are stepbrothers. It was a bit challenging for them in the beginning, but they started bonding over their love of the Beatles, listening to music and so on. They eventually created a band whose name was “The Reasons”. Their focus was on bringing something unique, distinctive and interesting at the same time. They added Liam Meadowcroft and then they eventually added his younger brother Nolan to create Milou Sky.

At their core, the idea is very simple. Milou Sky wants to combine the 60s rock music with the 90s grunge and also some modern pop. All of that might sound like a challenge to blend together, and it was a bit in the beginning. But the team managed to pull it off, and Milou Sky is now able to deliver a very interesting type of music. It’s distinctive, unique and also very engaging and fun. That alone really makes a huge difference, and it shows the value being brought to the table by something like this.

Reaching success was not a walk in the park for the Milou Sky band. Their focus was to always create something unique, different and which constantly pushes the boundaries with its relevant ideas and quality content. We believe that they managed to achieve a lot of success with it, and the approach was indeed one of the best out there. Sharing this type of connection and value wasn’t easy, but it did manage to pull off some creative options for everyone to pursue.

Despite being young, the Milou Sky band members have their souls and musical ideas stuck in the past. Which is great for them, because it brings in front a lot of amazing ideas and exciting options to consider and pursue. It’s just a very engaging and empowering experience, something unlike anything else on the market.

During the pandemic, Milou Sky had all their gigs canceled, so they tried to connect with the audience via social media. This is what allowed them to become true social media influencers. They accrued a lot of amazing followers through their ideas and they pushed the boundaries, trying to bring in more and more creative music to everyone. They actually got into top 30 of the Alternative iTunes Charts with their song named Compromise. This is a great insight into the brilliant mind of the Milou Sky band and how they managed to surpass all expectations simply by taking the experience to the next level and finding unique ways to communicate with everyone.