Virat Kohli and Anushka Sharma have been receiving congratulatory messages from all over the world ever since they announced their first child's birth. Diaper brand Pampers India also welcomed the batsman's baby by launching the #DadsforVirat campaign. 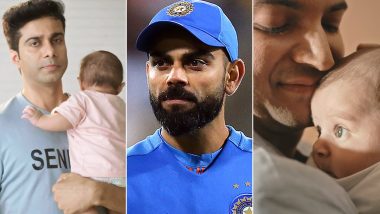 Virat Kohli and Anushka Sharma have been receiving congratulatory messages from all over the world ever since they announced their first child's birth. The Indian cricket team captain and the Bollywood actress have been blessed with a baby girl, and Kohli shared the delightful news on January 11. Fans went in a frenzy after coming across the information as social media got flooded with wishes. Diaper brand Pampers India also welcomed the batsman's baby by launching the #DadsforVirat campaign. In the newly-launched advertisement, several fathers were seen giving parental tips to Kohli using cricket analogy.

While a person explained the technique to hold the baby, another guy stressed the importance of wrist work. "Dear Virat, you've been there for the country so many times, and it's time we're there for you. We at Pampers believe that #ItTakes2 to raise a baby and here's some fun advice from dads across the country. Because every dad needs a little help in the beginning - even the greatest of the greats!" the diaper brand wrote while sharing the advertisement on YouTube. Have a look!

Meanwhile, Virat and Anushka have urged paparazzi not to take pictures of their new-born daughter. The power couple wrote a note to the paparazzi fraternity, urging them to respect their privacy. As a token of gratitude, Anushka and Virat also sent some gifts to the photographers.

Coming to the cricket front, Kohli was last seen in the India vs Australia Test series where he played only the first game before flying back home. Nevertheless, he's set to get back in action during the home Test series against England which gets underway in February.

(The above story first appeared on LatestLY on Jan 14, 2021 06:06 PM IST. For more news and updates on politics, world, sports, entertainment and lifestyle, log on to our website latestly.com).