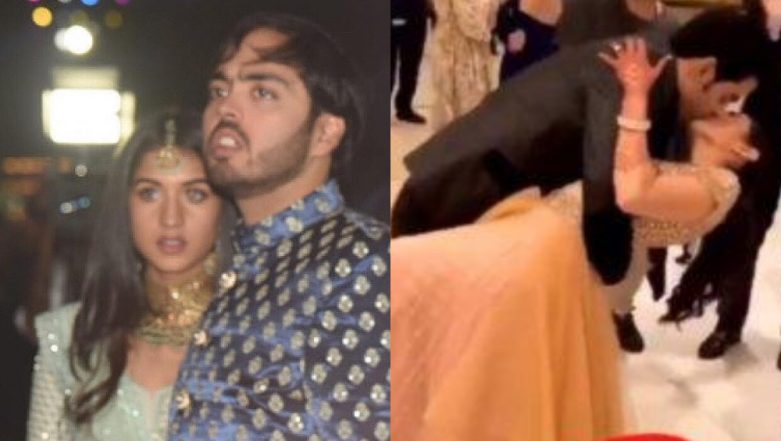 It is only March and we already have our hands on pictures and videos from the biggest wedding of the year. Akash Ambani and Shloka Mehta got married in a lavish wedding ceremony on March 9. A new video of the newlyweds sharing a kiss has gone viral on social media. The pictures and videos from the wedding ceremony and the reception are the talk of the town for the past three days. Well, of course. India's top industrialist Mukesh Ambani's son got married to renowned diamond merchant Russell Mehta's daughter. People are going to talk about the wedding for a while now. Newlyweds Akash Ambani and Shloka Mehta Glow in Gold at The Post Wedding Bash - See Pics.

In the video, uploaded by several fan pages, we can see Akash and Shloka sealing it with a kiss after a dance. Their friends and family members around the couple chanted "We want a kiss".  The crowd cheered in unison having their demand met. But within the focus turned to Anant Ambani and his girlfriend, Radhika Merchant. Akash Ambani and Wife Shloka Mehta’s Romantic Dance With Maroon 5’s Adam Levine Taking the Center Stage Will Leave You Awe-Struck– Watch Video.

Watch the video of Shloka and Akash sharing a kiss here:

Akash Ambani and Shloka Mehta seal their wedding with a passionate kiss! 😍😍

The crow, along with big brother Akash, started chanting again urging Radhika and Anant to kiss. But Radhika was in no mood to be embarrassed under peer pressure. The young woman, funnily, refused to oblige. Or at least that is where the video abruptly ends. What happened next has been left to the imagination.

Radhika is the daughter of Viren Merchant, the CEO and Vice Chairman of Encore Healthcare. Radhika has graduated from New York in politics and economics. Is Radhika and Anant's wedding next? Mukesh's daughter Isha Ambani got married to Anand Piramal in December 2018.