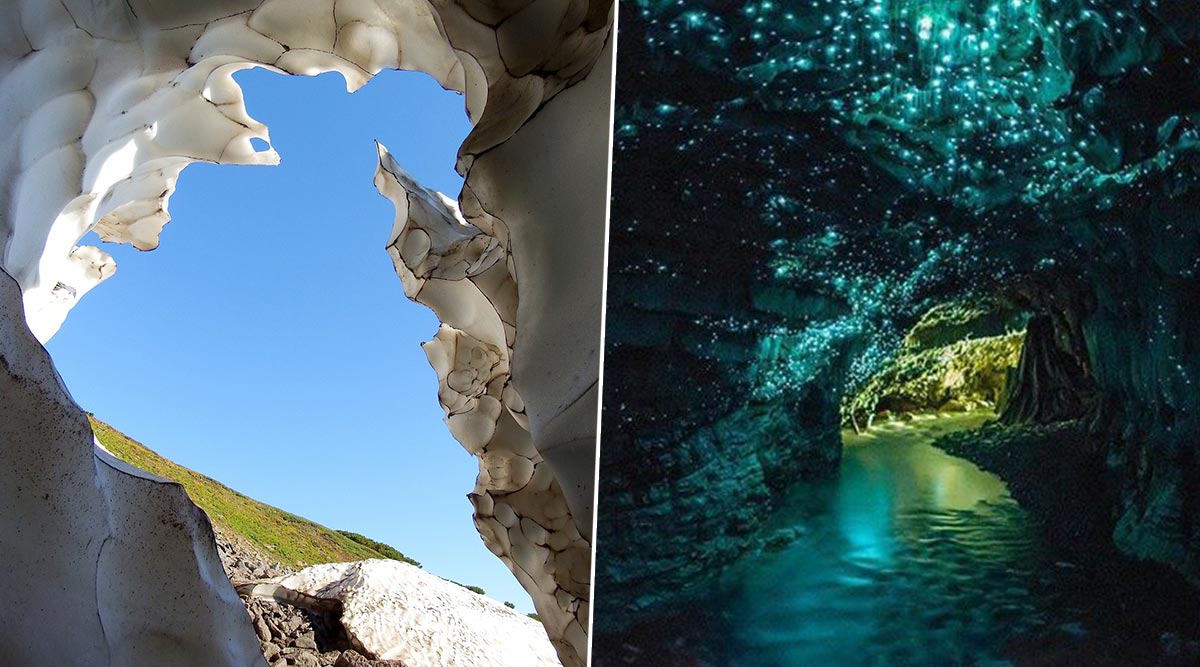 Caves have always been a topic of study among scientists. They hold secrets of the past and gives us a peek into the life of our ancestors. From traditional artefacts, paintings, instruments, weapons, caves have provided today's generation with an array of objects that have aided researchers in their study of the past. They also are a beauty in themselves. Various factors including geographical locations, its proximity to water and structure make caves unique. Many are formed due to weathering of rock and some remain hidden from the rest of the world. The naturally formed underground structures hold natural beauty with some showing off incredible colours and distinctive patterns making it an explorer's paradise. Many hidden caves were recently found out including Hang Son Doong cave in Vietnam. Here, we bring to you top 7 caves known for its natural beauty, size and geographical marvel. Mawjymbuin Caves Emerge As Tourist Hotspot in Meghalaya.

Located in the North Island of New Zealand, Waitomo caves are known for glow-worms that light up the upper part of the caves. You can walk or take a boat tour to witness the marvel. You can crawl, swim or float through the caves on a rubber tube.

Situated in the uninhabited island of Staffa, in the Inner Hebrides of Scotland, Fingal's Cave is an incredible one. It is filled with hexagonal columns made up of basalt which form the walls and its natural acoustics. It is formed due to the contraction and fracturing of solidified lava that led to the development of the pattern. Also, the naturally formed arched roof helps in producing hypnotic melodic keys as the waves hit the basalt walls. You explore the chamber on a boat or walk around. 330-Million-Year-Old Shark’s Well Preserved Fossilised Head Found in Kentucky Cave (See Pictures)

Blue Grotto is a sea cave located on the coast Capri island in southern Italy. What makes it unique is the stunning blue reflection of water created by the sunlight passing through an underwater cavity. It extends some 50 metres into the cliff and is about 150 metres deep. Tourists take boat tours at the time when the cave gets illuminated by the natural light.

Reed Flute Cave situated three miles northwest of downtown, Guilin in China. Known as the 'Palace of Natural Arts', the Reed Flute Cave gets its name from the unique reed found around the cave which is used to make flutes. The cave was spotted by refugees who were escaping the Japanese forces during World War II. The cave is 180 million years old and has ink inscriptions dating back to 792 AD in the Tang Dynasty. Colourful artificial lights are set up making the caves look quite impressive.

The inside of Kamchatka caves looks straight of a movie scene. Situated on the Kamchatka Peninsula of Russia, it was formed by a hot water spring flowing on the ice fields beneath the Mutnovsky volcano. A group of photographers found the cave by chance in 2012. As the ceiling is made of a thin layer of ice, the sun illuminates the structures making it look magical

Hang Son Doong in Vietnam is the world's largest cave. It is the largest known cave passage in the world by volume and is believed to be between 2 and 5 million years old. It has limestone cave pearls and an underwater tunnel connecting it to another cave. It was found by a local mani in 1991 and you can visit the cave from February to August. The cave stretches over five kms and reaches a height of 200 m. You need to undergo intense jungle trekking and river crossings to reach the cave. You can climb, crawl, abseil in the cave other than swimming in the underground rivers to reach the end of the cave.

Chile's marble caves have been formed by the waves crashing into solid calcium carbonate for 6,000 years. The blue patterns change their colours and intensity throughout the year. Located in the middle of Lake General Carrera, you have to go on a boat tour to visit the caves.

For those who love exploring, caves are the best places to visit. You are sure to find something anew inside these nature's wonders no matter how many times you go. While some have been discovered, others remain hidden beneath rocks, ice or even the sea. Visit the caves and experience nature a bit more closely!