Arthur Chatto—Queen Elizabeth’s grandnephew whose fitness regime is making fans sweat. The 21-year-old is basically abs and general hotness in personified, human form. Internet is collectively lusting after him. 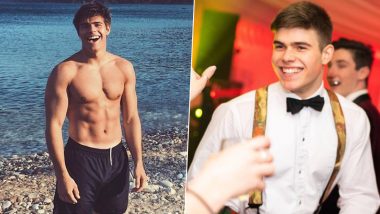 Social media is a wild place to be in, and if you are a regular user, you must have lately come across some extremely hot pictures and workout videos of Arthur Chatto. Who is he? Well, he is officially internet’s new royal thirst trap to drool over. We know, when it comes to the royals, the headlines are usually dominated by the British royal family members, mainly Prince William, Kate Middleton, Prince Harry, Meghan Markle or the Queen herself. But this time, it is Arthur Chatto—Queen Elizabeth’s grandnephew whose fitness regime is making fans sweat. The 21-year-old is basically abs and general hotness in personified, human form. Looking at his hot pictures and videos, we are not really surprised why the internet is collectively lusting after him.

Arthur, who is Princess Margaret’s grandson, currently works as a personal trainer at BoundFitness in Scotland. According to reports, he is studying for his geography degree at the University of Edinburgh. Gyms are currently closed in the country, and hence the royal has been sharing his workout tips on BoundFitness Instagram page, where his workout videos are raising the temperatures. Meghan Markle Reveals She Suffered Miscarriage in July 2020, Duchess of Sussex Recounts Her 'Unbearable Grief.'

Arthur is the 26th in line to the British throne and sometimes dubbed as possible “next Prince Harry.” He managed to steal some of the spotlights from Prince Harry and Meghan Markle’s wedding day, when he rolled up to his second cousin’s wedding escorting his mother, Lady Sarah Chatto. But his latest workout videos, photos, flaunting those drool-worthy abs have made him internet’s latest royal obsession.

His Instagram bio says that he holds not one, but two world records—for youngest team and person to row around Great Britain to raise money for the British Red Cross. Since, he is earning so much hearts on social media; we bring you more thirsty pics for royal fans’ scrolling pleasure.

Drooling Over His Smile Or Ahem, Abs?

Arthur already has 192K followers on his personal and verified Instagram, where he racks up hearts and likes by the tens of thousands. Thanks to his charming looks, and that muscled body, the royal is sure to have more compliments and attention coming his way.

(The above story first appeared on LatestLY on Jan 17, 2021 05:13 PM IST. For more news and updates on politics, world, sports, entertainment and lifestyle, log on to our website latestly.com).