With TikTok in Hot Water, Shadowbox Steps Up to the Plate 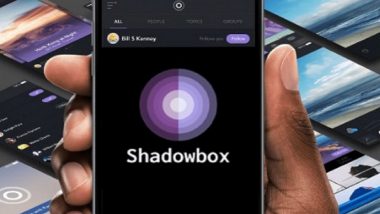 In recent weeks, the popular Chinese video sharing social media platform TikTok has made headlines due to national security concerns. While 41% of TikTok users are between the ages of 16 and 24, the potential threat of the app’s ban in the United States has sent millions of teens and young adults into despair. But one up and coming social media influencer platform and agency has been tirelessly working on developing their own version of a video sharing social media platform to rival the functions and display of TikTok. Introducing Shadowbox.

What started out as an agency for social media influencers Shadowbox has now developed into a technology powerhouse that’s picking up speed with the intention of taking over TikTok audiences. Along with the app itself, Forman has developed a new in app payment system that allows the user to send and receive payments without ever leaving the app and is introducing “hotlinks” technology that minimizes search time dedicated to multi-part posts—something Instagram, Tiktok, Facebook, Twitter or any other social platform currently does not offer their users.

But with the future of TikTok in jeopardy, Shadowbox is stepping up to take its place. Though the ban in the United States has yet to go into effect, Forman has been working away on his own version of the app. In fact, the Shadowbox CEO is currently in preliminary stages of design and development for a Shadowbox app that will serve as an American-based video sharing social media platform, very similar to TikTok. The tech entrepreneur is partnering with Appz Depot to bring the Shadowbox app to life and anticipates a launch within six to 12 months time. Right now the app is only 60-70 days away from a beta testing phase where they will test a working demo of the product. With added features that even TikTok doesn’t have, the Shadowbox app will promise users better interactive and communicative capabilities between users.

“With Covid and social injustices being the topic of so many conversations in 2020, it seems like there’s a void in the social media community when it comes to bridging the gap between social media and social causes that we’re really looking forward to filling,” Forman says.

With this in mind, Forman is additionally vetting venture capitalist groups that fit the company’s personality and priorities when it comes to values and social awareness.

Though in the meantime, while the app is in the works, Shadowbox continues to see success in their rising influencers, whether through TikTok or even Instagram and other platforms. For more information and to learn about how to become a Shadowbox influencer, visit their website at www.shadowboxdc.com.