From Billie Eilish's horrified expression to Martin Scorsese desperately fighting sleep during Eminem's electrifying performance, it is raining memes. While, TBH, Billie Eilish took away the cake, we cannot get over director Bong Joon-ho's sweet expressions after he won the award for best original screenplay for his film Parasite. 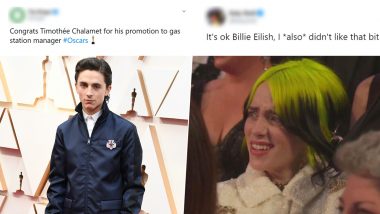 Well, just like we thought, how could an event like the 92nd Academy Awards get over without churning memes, despite having the biggest star attendance in the Hollywood’s Dolby Theater? Right from Brad Pitt, Leonardo DiCaprio, Margot Robbie to Timothée Chalamet, Saoirse Ronan, Emma Watson and Meryl Streep, Oscars 2020 was star-studded and so were our social media timelines.  However, we can safely that the memes from the even took the real Oscars home. We had so many meme-worthy moments at the Academy Awards 2020 that it is crazy! From Billie Eilish's horrified expression to Martin Scorsese desperately fighting sleep during Eminem's electrifying performance, it is raining memes. While, TBH, Billie Eilish took away the cake, we cannot get over director Bong Joon-ho's sweet expressions after he won the award for best original screenplay for his film Parasite. Timothée Chalamet's casual red carpet attire grabbed sarcastic comments on Twitter as well. Oscars 2020: Bong Joon Ho Wins Best Original Screenplay for Parasite and Twitterati Can't Get Over His 'Smiling Moment' Admiring the Oscar Trophy.

We really cannot contain our laughter. Also, we heard that Julia Butters packed a turkey sandwich in her handbag because she doesn't like a lot of the Osars food. Oscars 2020 was a meme fest of the highest order. Let's take a look at the best memes and jokes from Oscars 2020:

Me: Let Maya Rudolph and Kristen Wiig the #Oscars next year!

It was the most meaningful look in the world.. Thank you for being an interpreter for our feelings Billie 😂😂😂😂😂😂#Oscars pic.twitter.com/E2cblgfsko

Want to feel really old? Watch this clip of Billie Eilish making a face at Kristen Wiig and Maya Rudolph being comedic geniuses!!!!! Like are we Susans and Karens to young people now or what #Oscars pic.twitter.com/0JngC4FbWJ

Martin Scorsese Can *Really* Use Some Sleep

Nothing Makes Us Happier Than This

Bong Joon-ho admiring his Oscar is a vibe #Oscars pic.twitter.com/dKTLvM6Xqf

This is not the first time a Hollywood event has flooded Twitter with memes and jokes. Funny memes were all over social media when Fiji Water girl was legit in every frame of 2019 Golden Globes. Just last week when Shakira's tongue went viral after her performance during the 54th annual Super Bowl halftime show at the Hard Rock Stadium in Florida. How can we forget, Jennifer Lopez’s Golden Globes show-stopping green and gold Valentino gown being compared to a Christmas ornament while Jason Momoa’s tank top broke the internet?

(The above story first appeared on LatestLY on Feb 10, 2020 10:31 AM IST. For more news and updates on politics, world, sports, entertainment and lifestyle, log on to our website latestly.com).