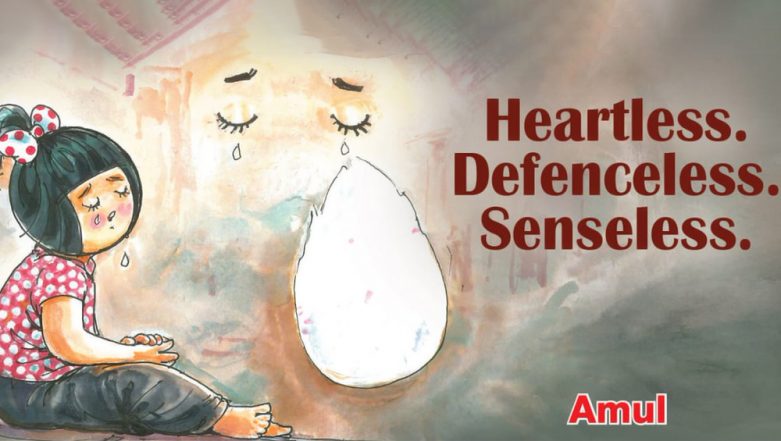 Easter Sunday 2019; the day after suicide bombers carried out coordinated attacks on half a dozen hotels and churches, across this island nation, Sri Lanka remained in shock. The death toll continued to climb. It is reportedly the deadliest violence to hit the South Asian country since the civil war ended a decade ago. The investigation is on. In this period of grief, the world has united, extending their unlimited support to the Sri Lankan Easter bombing victims. In one such effort, Indian brand Amul has paid an emotional tribute to the victims of Sri Lanka blasts. The teary-eyed picture of Amul girl is reaching to the emotional spine of the netizens on social media. Amul Pays Tribute to IAF Wing Commander Abhinandan Varthaman's Moustache With a Video.

The world is in grief, and so is the little Amul girl, who otherwise has always been jolly. In the Amul topical as support to Sri Lanka blasts’ victims, the animated image reads, “Heartless, Defenceless, Senseless,” along with the country’s map, which appears as a tear. Followers have lauded, Amul’s tribute, while extending their grief to the victims and survivors of the serial blasts. Death Toll Jumps to 359, Sri Lankan President Announces Reshuffle of Intelligence and Security Forces.

The terror has not ended. On April 25, from a vacant land behind the magistrate court in the town of Pugoda, 40 km east of the capital Colombo. Meanwhile, investigators continued to collect evidence at the church, where flesh and burned hair were reportedly stuck to the walls, and sunlight streamed through holes in the roof. ISIS has claimed responsibility for the attack. Sri Lanka’s Prime Minister Ranil Wickremesinghe reported that some of the suspected attackers responsible for the Easter Sunday bombings were being monitored by the country’s intelligence services.