Applying Makeup in a Moving Car is Dangerous! This Woman Had Her Eyeliner Stuck in Eye After Freak Accident

Her eyeliner stabbed in and remained in her eye as the taxi she was travelling in met with an accident. It is almost a miracle how she has not lost her vision. 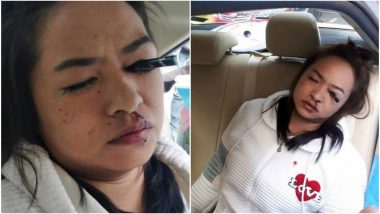 If you thought getting ready in the car is a good idea while you head to your destination, then this may change your view. A woman in Thailand experienced a horrifying incident that could have blinded her. Her eyeliner stabbed in and remained in her eye as the taxi she was travelling in met with an accident. It is almost a miracle how she has not lost her vision. It could have even damaged her further but the pencil slightly missed her brain.

The 20 something girl was passing through a slow-moving traffic in a cab in Bangkok. She was applying eyeliner when the cab of her driver shunted the truck in front, resulting the woman to come forward. She jolted with such a force that her eyeliner pencil got stuck in her eye. She hit the seat in front of her with that force. Her head rested on the back but she started bleeding profusely through her nose. She was immediately rushed to the hospital and was still conscious when she was being taken there.

The paramedics revealed that although the car crashing was just a 'minor' bump, the woman met with the freak accident which could have proved fatal. "We received a call and there was one injured female with an eyebrow pencil inserted into her left eye. She was in a lot of pain when we came but she could still talk to us and explain what happened. There was not a lot of blood but she had a small nose bleed," said Paramedic Thanabodee Sabbodi. They removed the eye pencil without any injuries. The rescue team and doctors did a great job. It was a slow-moving traffic situation and no one could have expected it turning into such a freak incident. but the incident serves as a major warning to all the women out there who prefer doing the makeup in their cars.

(The above story first appeared on LatestLY on Jun 13, 2018 09:22 PM IST. For more news and updates on politics, world, sports, entertainment and lifestyle, log on to our website latestly.com).