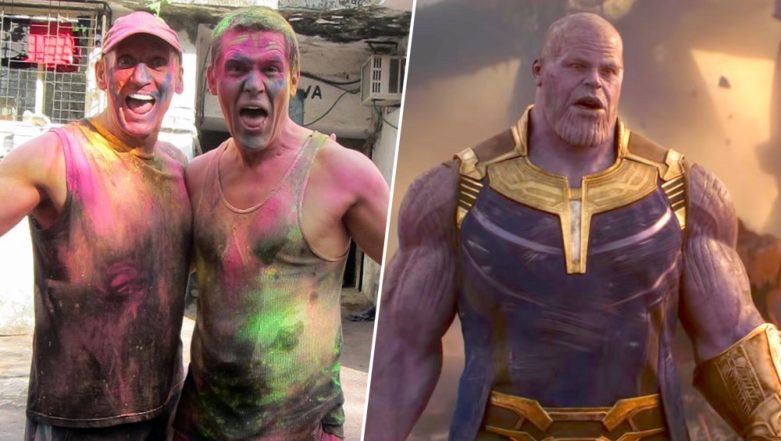 kOAvengers: Endgame is all set to release next month and the build-up towards this Avengers finale has been massive. The film has a huge fan following in India and this is the first time, the film's co-director, Joe Russo will be coming to India interact with Marvel fans in India ahead of the film's release. If all this is any less exciting, Thanos has now sent his Holi wishes to Indian fans. Well, yes actor Josh Brolin who plays the character of Thanos in Avengers: Endgame posted a throwback picture of him celebrating Holi along with a friend, author Gregory David Roberts aka Shantaram back in 2013.

Sharing the throwback picture where both of them are drenched in Holi colors, Brolin wrote, "Happy Holi Day! India 2013. #withshantaram." This post received a lot of love from his Indian fans who immediately started commenting on the actor's post, wishing him back and asking him to visit India soon. Avengers: Endgame New Trailer – 5 Scenes That Left Us Whistling (Watch Video)

Take a look at that picture here:

Josh Brolin's Thanos nearly wiped out fifty percent of the human race after his snap with the infinity gauntlet in Avengers: Infinity War. As the remaining superheroes unite to fight him back again in Avengers 4, it will be interesting to see how they win over Thanos. Recently, we saw a leaked picture of Brolin's Thanos from the last film and he was seen all armored in that one. Avengers: Endgame: Thanos' New Look From The Film on a Leaked Magazine Cover Shows Him Armoured along With The Infinity Gauntlet - View Pic!