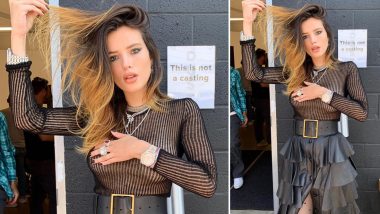 “Breaking the taboo of what's classified as beautiful has always been a vision of mine and it brings me such joy to see this being recognized for what it truly is...beautiful visionary art." #thelifeofawannabemogul

Though this seems like a bold project, it's not the first time for her.  She’s released songs like Bitch I'm Bella Thorne, P*ssy Mine, and F*ck Me Fire Truck. Pornhub’s VP is also a fan of Bella’s work. He describes the video as, “modernistic, sexually explicit Romeo and Juliet-like depiction of two star crossed lovers, who have an unbridled sexual longing for each other." He adds, "Their love is reckless and dangerous and transcends time and space”. The trailer of the video seems like a thriller. It includes knives, sloshing sounds, club-like lights and Bella describes her work as “beautiful, ethereal film”.

(The above story first appeared on LatestLY on Oct 01, 2019 09:48 AM IST. For more news and updates on politics, world, sports, entertainment and lifestyle, log on to our website latestly.com).