The movie also reimagines some of the celebrity's less well-known ties, such as those with actor Edward G. Robinson's son Eddy Robinson, Jr., and Charlie Chaplin's son Charlie "Cass" Chaplin, Jr. Although the movie implies that Marilyn was involved in a love relationship with the two guys, this is untrue. 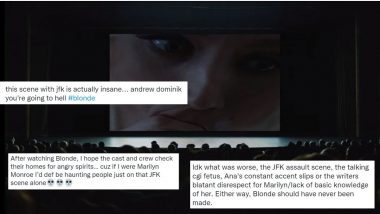 Monroe Coerced Into Having Rumoured Oral Sex  by Kennedy

It comes out that everything took place on a private plane flight. After using drugs and drinking, Marilyn was discovered unconscious on the plane's floor. Later, she showed up on the former US president's bed. Kennedy, who was on a business call at the time, poked his hand beneath the covers and told Marilyn not to "be bashful." Due to the effects of booze and barbiturates, Marilyn moved his hand while turning his head away. But the most powerful and disturbing scene occurred when Kennedy allegedly grabbed Monroe's head and forced her to engage in oral sex, according to the movie. Since then, videos of that unexpected scene have been circulated online.

The movie also reimagines some of the celebrity's less well-known ties, such as those with actor Edward G. Robinson's son Eddy Robinson, Jr., and Charlie Chaplin's son Charlie "Cass" Chaplin, Jr. Although the movie implies that Marilyn was involved in a love relationship with the two guys, this is untrue. Since then, various reviewers have expressed their displeasure with the representation. However, everyone is curious as to whether Marilyn was actually associated with Cass and Eddy.

The JFK scene in Blonde… pic.twitter.com/wqs63brxHb

Dear friend, I urge you to not watch the 🎞”Blonde”,it is NOT a biopic ! Marilyn Monroe did not have abortions,3somes,an affair with JFK; MM was not raped as an adult and she wasn’t constantly sad! This is a disrespectful misogynistic🎬,and it is vile, it’s all about hype+💵 !🤮 pic.twitter.com/tn1WUERjZY

Me halfway through Blonde: “Man I hope I don’t have to see JFK do anything sexual” Me at the end of the movie: pic.twitter.com/flm00gHLuf

Idk what was worse, the JFK assault scene, the talking cgi fetus, Ana's constant accent slips or the writers blatant disrespect for Marilyn/lack of basic knowledge of her. Either way, Blonde should have never been made.

This One Is Speaking From Heart

this scene with jfk is actually insane... andrew dominik you're going to hell #blonde pic.twitter.com/OeDdIRhtIl

Blonde star De Armas spoke openly about her anticipated response to the nude scenes when she spoke to Variety. The 34-year-old actress was the first to comment on the scenes and she stated. She had said: "It's disgusting. It's upsetting just to think about it. I can't control it, you can't really control what they do and how they take things out of context. I don't think it gave me second thoughts, it just gave me a bad taste to think about the future of those clips."

(The above story first appeared on LatestLY on Oct 04, 2022 11:39 AM IST. For more news and updates on politics, world, sports, entertainment and lifestyle, log on to our website latestly.com).