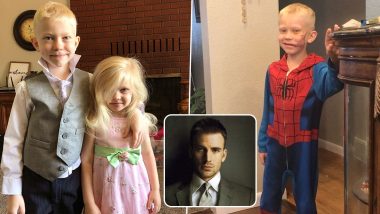 Bridger Walker, a brave 6-year-old boy from Wyoming in the United States, is gaining praises on social media for rescuing his sister from a dog attack. The young boy jumped into action when a one-year-old German shepherd mix charged towards his 4-year-old sister, as per the family who posted the incident on Instagram, along with photos of the brother and sister. Instead of running off, the dog jumped and latched Bridger’s cheek. He subsequently underwent a two-hour surgery that required more than 90 stitches. His heroic action to save his sister has brought happy tears to netizens. They are all very proud, including Marvels superheroes. Yes, his aunt Nikki Walker who posted the boy’s bravery on social media tagged marvel’s superhero actors, including Tom Holland, Chris Evans, Mark Ruffalo and as of now many responded in their own way. The Avengers assembled to thank and praise the 6-year-old Bridger for his bravery. In fact, Evans, aka Captain America, has a very special message for the boy in the video. Man Saves Baby Eagle From Drowning in Lake at British Columbia's Invermere Region.

On July 9, the dog approached the little girl, but Bridger stood in front of her. He jumped on to save his sister from the attack, at the cost of his own safety. When his father asked him why he jumped between his sister and the dog, the family quoted him as saying, “If someone had to die, I thought it should be me.” His aunt, Nikki Walker detailed the incident on her Instagram post, tagging the actors in the Marvels cinematic universe (MCU). TikTok Video of Pet Dog Hurling Away Snake in The Field Goes Viral.

Here's Pic of Bridger and His Sister, Read the Post:

My nephew is a hero who saved his little sister from an attacking dog. He, himself, took on the attack so that the dog wouldn’t get his sister. He later said, “If someone was going to die, I thought it should be me.” He got home from the hospital last night. I know it’s a long shot, but I’m reaching out to the Avengers and other heroes so that they can learn about this latest addition to their ranks. Please, check your DM’s for my sweet nephew’s story. @tomholland2013 @chrishemsworth @robertdowneyjr @markruffalo @prattprattpratt @twhiddleston @chadwickboseman @vindiesel @chrisevans @vancityreynolds @thehughjackman Edit: I never expected my sweet nephew’s story to reach so many. Please, follow my other post (I only have two so far 😅) for the latest info regarding my sweet nephew and his family.

As the post went viral, it immediately caught the attention of, Anne Hathaway, who played Catwoman in DC’s The Dark Knight Rises. She wrote on Instagram, “I’m not an Avenger, but I know a superhero when I see one. I can only hope I’m half as brave in my life as you are in yours, Bridger. Hey @markruffalo, do you need a teammate??”

I’m not an Avenger, but I know a superhero when I see one. I can only hope I’m half as brave in my life as you are in yours, Bridger. Wishing you an easeful recovery, and many cool looking rocks. ⁣ ⁣ Hey @markruffalo, do you need a teammate?? ⁣ ⁣⁣ Via @blackculturenews_ & @nicolenoelwalker

The Hulk did reply. According to the family, Bridger received private messages from the likes of Ruffalo, Tom Holland, Hugh Jackman, Zachary Levi and directors the Russo brothers. “Dear Bridger, I just read about what happened to you and I wanted to reach out to say this... People who put the well beings of others in front of themselves are the most heroic and thoughtful people I know. I truly respect and admire your courage and your heart. Real courage isn't dominating people or fighting against people or walking around like a tough guy. Real courage is knowing what is right to do and doing it even when it might end up hurting you somehow. You are more of man than many, many I have seen or known. With Admiration...Mark Ruffalo (Bruce Banner/Hulk/Professor),” Mark Ruffalo commented on the viral Instagram post. But Captain America star, Chris Evans had a special message for the 6-year-old.

Captain America Has A Special Message For Bridger!

There are no words. We are so, so thankful.

Bridger is so brave, and his courage inspired so many of us. He once again proved that not all heroes wear a cape, they instead come in all shapes and sizes and even in children. He surely gave us an important lesson to learn. More power to you, Bridger!

(The above story first appeared on LatestLY on Jul 16, 2020 06:30 PM IST. For more news and updates on politics, world, sports, entertainment and lifestyle, log on to our website latestly.com).