BTS' Jungkook Buys New Home for 7.6 Billion near the Indian Embassy Residence! 5 Amazing Things to Have Happened for K-Pop Group Members That Made The Army Go Crazy

It's a celebratory mood BTS singer Jungkook who has now officially a home in Itaewon, South Korea near the Indian Embassy. The K-Pop biggie had made the purchase back in November in the plush locality. 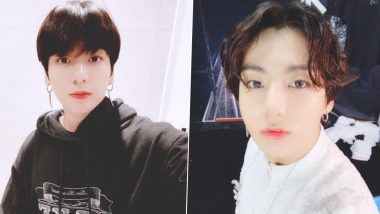 It's a celebratory mood BTS singer Jungkook who has now officially a home in Itaewon, South Korea near the Indian Embassy. The K-Pop biggie had made the purchase back in November in the plush locality, a few weeks after selling off his luxury Trimage complex apartment. The house is not of an apartment-style but a standalone property reportedly built back in 1976. Obviously, it didn't come cheap. The singer spent a whopping ₩7.63 billion KRW for the house. The past few months, including the new year, has been great for BTS group sending the ARMY into a frenzy. Here are 5 great things that happened for the K-Pop group that made fans happier than ever!

BTS' V Sets Most Records in 2020: The band member who recently turned a year old on December 30 & was the only 2nd star to feature on Burj Khalifa, the world's tallest building also set most records in 2020.

BTS Singer V aka Kim Taehyung Became The Second Star After Shah Rukh Khan: #TaehyungOnBurjKhalifa took over Twitter after BTS's V became the first idol whose name and photo appeared at the Burj Khalifa, Dubai, the world's first tallest building after Shah Rukh Khan. This was a super expensive gift for V's 25th birthday on December 30 from his Chinese fans.

BTS Took Home 4 Daesangs for 2nd Year in a Row: December 6 was a big day for the favourite BTS when the K-Pop group took away all 4 Daesang awards at the 2020 Mnet Asian Music Awards. BTS pics for you to celebrate!

BTS, the K-Pop group is love. Not just Koreans but people around the world are obsessed with BTS and take pride in being a part of the BTS army. Searches like BTS members names, BTS songs, BTS V, BTS Twitter, BTS full form (which btw is Bangtan Boys), BTS Jungkook, BTS boy with luv, BTS army, etc. are always on top.

(The above story first appeared on LatestLY on Jan 06, 2021 09:10 AM IST. For more news and updates on politics, world, sports, entertainment and lifestyle, log on to our website latestly.com).