BTS' Jungkook Becomes the Most Searched K-Pop Idol on Google in the First Half of 2020 and the Army Cannot Keep Calm! Check Messages & Greetings 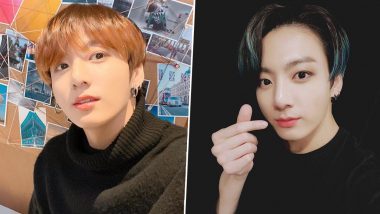 Out of the 25 weeks, Jungkook was the most searched person as the South-Korean celebrity on YouTube. The Korean boy band BTS, also known as the Bangtan Boys, aren't just confined till Korea but its craze spreads far and wide. BTS, the K-Pop group is love. Not just Koreans but people around the world are obsessed with BTS and take pride in being a part of the BTS army. Searches like BTS members names, BTS songs, BTS V, BTS Twitter, BTS full form (which btw is Bangtan Boys), BTS Jungkook, BTS boy with luv, BTS army, etc. are always on top.  Fans have taken over social media by a storm with messages, greetings, wishes and a lot of love with purple hearts for the BTS member. Check tweets:

jungkook is so cool, the coolest pic.twitter.com/GrAlMtWjuK

this jungkook in slomo pic.twitter.com/FjVgWnYcYT

2020 was great for BTS Jeon Jung-kook, aka Jungkook who bagged the prestigious title of the Sexiest Man Alive 2020. Fans took over social media to celebrate the most-loved K-Pop music band, BTS and Jungkook. Recently,  Dynamite video surpassed 600 million YouTube views, the K-Pop singers recently dropped their new album BE along with the music video of their title track, ‘Life Goes On’ it looks like the BTS group is going with more than one labels into 2021 and we excited!

(The above story first appeared on LatestLY on Dec 26, 2020 11:08 AM IST. For more news and updates on politics, world, sports, entertainment and lifestyle, log on to our website latestly.com).