'Calm Down, I'm Going to Turn Myself In,' Hilarious 'Wanted' Criminal From Washington Promises Richland Police on Facebook

He has a history of illegally possessing prescription drugs, resisting arrest and violating protection orders. 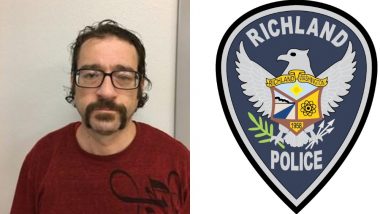 A criminal from Washington has become the talk of internet town with his reply to Richland Police's 'Wanted' post on him! 38-year-old Anthony Akers turned himself in and had quite a conversation on Facebook much to the amuse of netizens. Along with a picture of Anthony, Richland WA Police Department took to Facebook last Thursday writing, "Wanted Wednesday! Anthony Akers (38) is wanted by the Department of Corrections for Failure to Comply. If you have any information please call 509-628-0333." And in some time, Anthony replied to the post shocking social media users.

He wrote, "Calm down, im going to turn myself in." Although he offered to go to the police station by himself, he did not keep his promise. And guess what? The police actually messaged reminding him that he did not keep his word. Richland Police's comment reads, "Hey Anthony! We haven't seen you yet. Our business hours are 8:00 am - 5:00 pm Monday through Friday. Of course if you need a ride you can call non-emergency (509-628-0333) and we will pick you up." Man's Hilarious Attempt to Rob Colorado Store As His Gun and Pants Drop Is Going Viral (Watch Video)

He messaged saying he is coming!

He has a history of illegally possessing prescription drugs, resisting arrest and violating protection orders.

Anthony apologised for not keeping up citing "commitment issues" and promised that if he did not arrive by lunchtime, they can go get him. Meanwhile, the police also replied to social media users asking if had turned himself in or not. On Tuesday, he arrived at the police station and posted a picture saying he was there for a "date". Meanwhile, the internet had a great time read the conversation, commenting and laughing their heads off.

(The above story first appeared on LatestLY on Dec 07, 2018 02:19 PM IST. For more news and updates on politics, world, sports, entertainment and lifestyle, log on to our website latestly.com).