The love for him is pouring online. People have blessed him to make more records, keep doing what he does and thanked him for making them smile. We won't be surprised if there are more funny birthday memes coming in through the day. 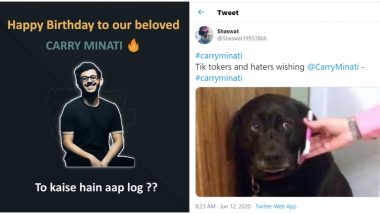 YouTuber CarryMinati celebrates his birthday today. He became a household name last month when he stirred up the YouTube Vs Tiktok roast. His video on criticising TikToker Amir Siddiqui had almost made records before YouTube took it down. A week ago, he was back with another video of his rap Yalgaar. His fandom is quite obvious as, after every release, fans have taken to social media to trend him. With today being his birthday it is no surprise that #CarryMinati is among the top trends on Twitter. Fans have shared wishes and blessings of their favourite YouTuber and some have resorted to the same old funny memes and jokes. CarryMinati Yalgaar Funny Memes & Jokes Trend on Twitter As Comedian Ajey Nagar Drops New Rap YouTube Video!

Ajey Nagar caused much buzz last month after his release of YouTube vs Tiktok: The End video. The video garnered millions of views and likes in the shortest span, and was about to make the most liked and most popular non-music video on YouTube globally. But after facing accusations of cyberbullying, YouTube took it down citing harassment. Not just fans, even other social media and YouTube stars stood in support of Carry Minati. The debate went on for quite a while. But it surely made an increase in Carry Minati's fan following. His fans are now trending his birthday wishes on Twitter. #CarryMinati, #CarryKaJawab and #YalgaarHo Funny Memes and Jokes Set the Internet on Fire, Thanks to YouTuber Ajey Nagar’s Latest Rap Video Yalgaar!

Using His Pick Up Line

Thank You For Making Us Laugh

Thanks #carryminati for making us laugh in this quarantine and standing up against bigots 😘😚 pic.twitter.com/05IDpYkT1O

He has broken records more than his age. At the age of 21 he become a global star with so much fame, money, respect. Happy birthday to the Legend of this decade @CarryMinati #HappyBirthdayCarry pic.twitter.com/YRyvSRAx1L pic.twitter.com/gMCN74VQUN

Happy Birthday to The Champ

The love for him is pouring online. People have blessed him to make more records, keep doing what he does and thanked him for making them smile. We won't be surprised if there are more funny birthday memes coming in through the day.

(The above story first appeared on LatestLY on Jun 12, 2020 08:46 AM IST. For more news and updates on politics, world, sports, entertainment and lifestyle, log on to our website latestly.com).