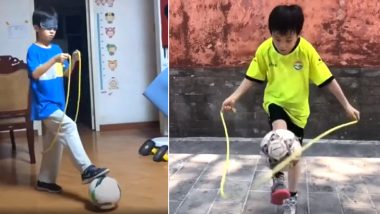 A nine-year-old Chinese schoolboy has become popular for his ability to skip and juggle football at the same time. His incredible ability does not end there, Yi Bingsheng, can do the tricks with his eyes closed. As his video went viral, many netizens said that he was 'a future Messi'. According to Yi's social media handle, he has been playing football for two years as a member of his school team. On Chinese app Douyin, his mother has been posting videos of him kicking footballs while rope-skipping since April. The kid now has over 13,000 followers and one of the recent videos show the little one skipping for 40 times without fail. Somersault in Saree! Video of Woman Effortlessly Doing a Flip Jump in Air Goes Viral, Twitter Says, 'India's Got Talent!'

He loves football and has been practising the trick for four months now. There is also a video of him trying to trying being blindfolded and attempt the trick involving elements that need utter precision. He tried it after being inspired by a Japanese boy, Toa Yamasaki. The caption of the video reads, "Officially started the challenge today! Chinese people can also do this!"  He learnt to be blindfolded and while skipping and dodge ball in just three weeks. Video of Young Boy Performing 30 Somersaults in One Attempt Goes Viral, Netizens Want Sports Authority of India to Take Notice.

The video shows him doing 11 keep-ups effortlessly while jumping ropes and his eyes shut. One of the comments on the video reads, "Wow, you are incredible! You have an amazing ability to control the ball. This is a natural talent." We are sure Yi is going to grow up to break many records and be known for his incredible talent. We wish him all the best and hope he is able to fulfil his dreams.

(The above story first appeared on LatestLY on Jul 11, 2020 04:19 PM IST. For more news and updates on politics, world, sports, entertainment and lifestyle, log on to our website latestly.com).