A tiger approached a tourist vehicle and bit the rear area. This ferocious wild cat even pulled it back, while people from another vehicle captured the close encounter on camera. The video is being widely circulated over social media sites like Twitter, Facebook and WhatsApp. 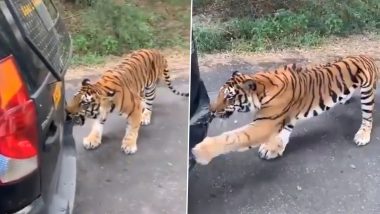 Do you ever want to go on a wildlife safari and experience the wild animals, up close? As fascinating at it may seem, a video from Bengaluru's Bannerghatta National Park might scare you a bit. A tiger approached a tourist vehicle and bit the rear area. This wild cat even pulled it back, while people from another vehicle captured the close encounter on camera. The video is being widely circulated over social media sites like Twitter, Facebook and WhatsApp. The tiger was accompanied by another one in just a while but thankfully, the wild cats weren't ferocious. The tiger seemed curiously inspecting the tourist vehicle and even took off the bumper with its strength. Tigress Chases Tourists During Safari Ride at Ranthambore National Park in Rajasthan's Sawai Madhopur, Viral Video Scares Netizens.

A tourist vehicle is seen standing still on the road and a Bengal Tiger approaches them. The curious tiger bites on its bumper and with its strength pulls the vehicle back. There are tourists inside the vehicle at the time. Meanwhile, another vehicle from where the footage is being captured, try to shoo away the tiger, when another wild cat is seen approaching from the surrounding forest. As per report in the Deccan Herald, the incident took place a couple of months ago. The tourist safari vehicle had stopped due to battery issues and was unable to start. Vanashree Vipin Singh, Executive Director of the Bannerghatta Biological Park was quoted, "As the vehicle was stranded, the tiger out of curiosity approached and played with the vehicle. Later, the vehicle was towed safely by our rescue team." Bengaluru Welcomes Its First Giraffe, Gowri at the Bannerghatta Biological Park: Watch Video and Pic of New Guest.

Check the Video of Tiger in Bannerghatta Biological Park Here:

What would be your reaction, had you been in this vehicle? Multiple users have the video clip on social media, appreciating the strength of the animal. However,  These tigers are said to be rescued and bred under captive conditions, which is why they probably weren't aggressive but just curious about the vehicle. Had it been aggressive, they could have attacked them.

(The above story first appeared on LatestLY on Jan 18, 2021 09:46 AM IST. For more news and updates on politics, world, sports, entertainment and lifestyle, log on to our website latestly.com).