Cristiano Ronaldo or Lionel Messi As Boyfriend? Girls Asked to Pick Date Partners in This YouTube Social Experiment and We Have a Clear Winner! (Watch Video) 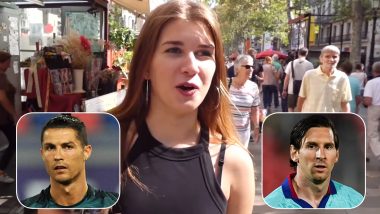 Cristiano Ronaldo or Lionel Messi, who would you date? A YouTuber, on his visit to Spain, went out on the streets asking women would they want as their boyfriend if given a choice between Messi and Ronaldo. Surprisingly everyone had an answer and different ones. Popular YouTuber Torres Pit carried out this hilarious social experiment on the streets of Barcelona apparently just after Ronaldo had joined Juventus from Barcelona in 2018 and the result was as always competitive. Both Ronaldo and Messi are undoubtedly two of the world’s best footballers in the last decade and have shared numerous accolades between themselves. Lionel Messi 700th Goal Video: Watch  Barcelona Star Net 700th Career Goal With Utmost Ease Against Atletico Madrid.

Debates surrounding Ronaldo and Messi have always been constant in the footballing world. Fans have often engaged in fierce competition with stats and facts to prove who is the better footballer between the two and who is the best footballer of all-time. In the YouTube social experiment, fans are made to once again compare the two. Only the twist being this time they must decide and pick their date partner and boyfriend. Cristiano Ronaldo’s Long-Range Rocket Against Genoa Recorded at 105 KMPH, Juventus Forward's Goal Video Goes Viral.

In the video, the first three girls asked, on who would they want as a boyfriend between Ronaldo and Messi, chooses the Barcelona superstar. A fourth though picks Ronaldo. But Messi hits the ball out of the park when a Madrid fan confesses that she would choose Messi over Ronaldo as her boyfriend.

One fan said that she would pick Messi as “he is the best footballer in the world” while another opined that the Argentine was “really natural” while also calling Ronaldo “fake and plastic-ish who shows off on social media.” Watch the video and decide yourself on who is the winner.

Meanwhile, both Messi and Ronaldo were on the headlines after scoring spectaculars on Tuesday. Ronaldo steered Juventus to 3-1 win with a rocket shot from outside the box in the second half while Messi reached the 700 career-goal landmark with a cheeky panenka penalty shot against Atletico Madrid in La Liga.

But unlike Ronaldo, Messi couldn’t power his side to a victory. Barcelona were held to 2-2 draw at home, their third draw in four games, leaving them one point behind Real Madrid in the La Liga points table. Madrid also have a game in hand and can go four points clear with a win over Getafe on Friday.

(The above story first appeared on LatestLY on Jul 01, 2020 11:20 AM IST. For more news and updates on politics, world, sports, entertainment and lifestyle, log on to our website latestly.com).