Disgusting! Used Condom Put on Snake's Head in Mumbai Leaves It Suffocated, How Much More Are we To Stoop in Animal Cruelty Cases?

An incident of animal cruelty from Mumbai's Kandivali region will leave you in disgust. Someone put an used condom over the head of a snake, which suffocated him. Thankfully, someone noticed it and called a snake rescuer, who rescued the checkered keelback just in time. 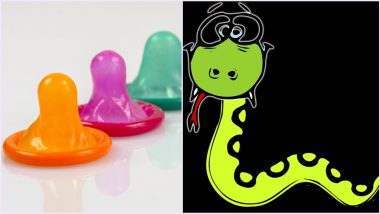 We have heard of numerous cases of extreme animal cruelty in the last year, but looks like some people still haven't learn the lesson. An incident of animal cruelty from Mumbai's Kandivali region will leave you in disgust. Someone put an used condom over the head of a snake, which suffocated him. Thankfully, someone noticed it and called a snake rescuer, who rescued the checkered keelback just in time. It is an incident of utter disgust and leaves us wondering, how much low are we to stoop with such inhumane actions which question humanity.

As reported by TOI, the incident took place near the Green Meadows housing society in Kandivali East. A local resident noticed a snake unable to move properly with some plastic covering over its head. A snake rescuer named Mita Malvankar was called to the spot to tend to it. Malvankar was shocked to learn, that it was a used condom. She rescued the snake who was unable to breathe because of the "synthetic obstruction." She also believed that this act was done by some trained snake catcher. "I suspect that some trained snake catcher or an expert may have done this cruelty, because it is not easy to handle a checkered keelback whose bite can be very painful, though not venomous. The sharp, needle-like teeth of a keelback sink into its victim and do not let it go immediately," she told the report. Happy New Year 2021, Really? Hundreds of DEAD Birds Litter Rome’s Street Thanks to NYE Fireworks Display—Will We Ever Learn?

After rescuing the snake, it was taken to Sanjay Gandhi National Park, where it was treated by veterinary experts. It was later released into the wild forest. The snake did show some signs of stress but it soon recovered. A case has also been registered against an unknown person behind this cruel act.

Animal cruelty is still not a stringently punished act in the country, which is one of the major reasons we see/hear of such instances. It was decided that government will bring in more stricter penalties and laws against such cases. But until then, are we to defile the humanity with such cruel acts?

(The above story first appeared on LatestLY on Jan 05, 2021 07:28 PM IST. For more news and updates on politics, world, sports, entertainment and lifestyle, log on to our website latestly.com).