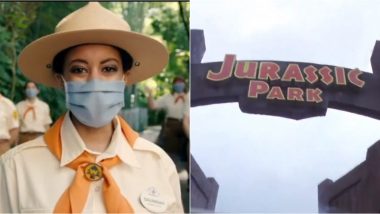 The Walt Disney World reopened attracting visitors all over again after COVID-19 lockdown norms were eased. They even made a video welcoming people 'home' after it was shut down in March. While a lot of people were excited about being able to go back to their favourite amusement park, not everyone appeared happy. While Disney shared pictures of their staff following social distancing norms, many social media users said that reality was far from the truth. People pointed out that the norms of social distancing weren't followed and the park should consider shutting down until things go back to normalcy. On Twitter comments both in support and against of their decision are being posted. Walt Disney World Unveils Makeover Pics of Royal Cinderella Castle.

One of the video clips taken from within and outside of the park shows that not all necessary steps are being considered inside the park. And another worrying element is the fact that Florida broke a terrifying record of 15,300 cases in a single day. With Walt Disney World being located in Orlando, Florida, their opening during such a time is not appreciated. People even called out Disney and made a spoof of the Disney's reopening video with that of Jurassic Park visual to show their decision was a scary one. Disney Reservation System Goes Down After Announcing Reopening Dates.

Cast members are ready to welcome guests back to Walt Disney World Resort.✨

Repost from @joshdamaro: We had an amazing morning with the Cast before reopening the park today. I’ve missed you all. So happy to be together again.

We are ready to welcome guests back to Jurassic Park. ✨ pic.twitter.com/kHSqTpkWSB

The outrage against Disney World's reopening comes at a time when Hong Kong Disneyland is all set to close for a second time after reopening on June 18. The park had closed earlier this year after which it reopened, but now after the COVID-19 curve flattened in Hong Kong, the city reported 52 new cases. Following which, Hong Kong Disneyland along with local authorities decided to shut down the park as a precautionary measure. Its decision came after many said that the surge in cases was due to reopening of the park a month ago. Talking about which, Disney spokesperson said,  "As required by the government and health authorities in line with prevention efforts taking place across Hong Kong, Hong Kong Disneyland park will temporarily close from July 15."

(The above story first appeared on LatestLY on Jul 14, 2020 12:19 PM IST. For more news and updates on politics, world, sports, entertainment and lifestyle, log on to our website latestly.com).