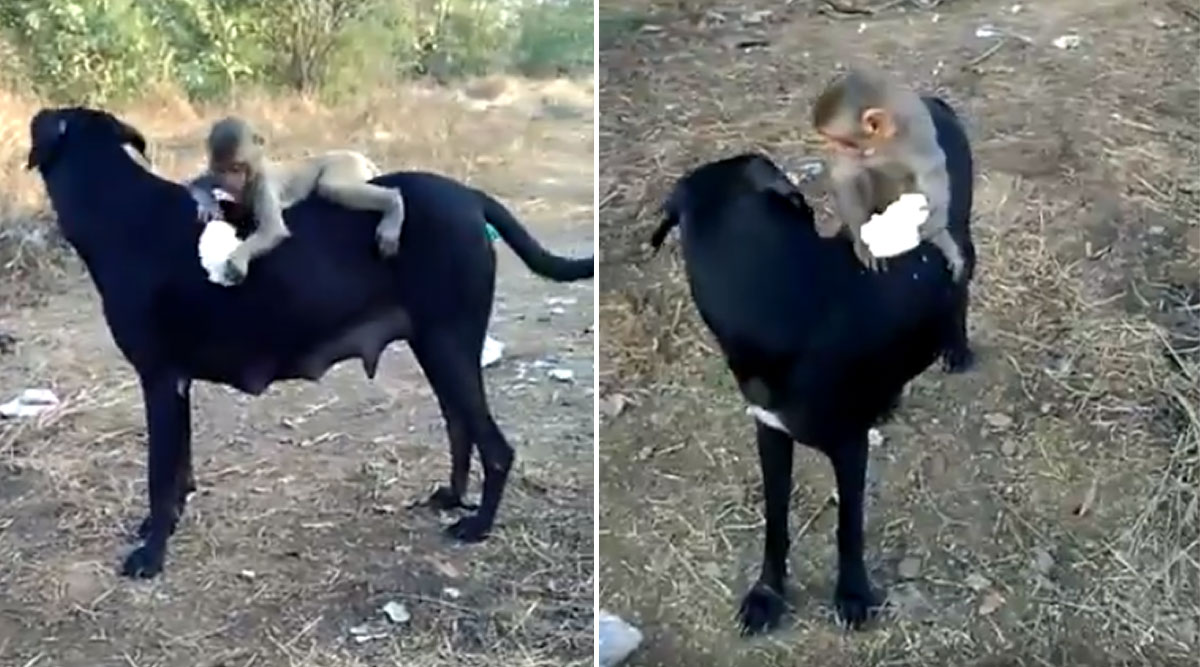 We keep hearing of unlikely friendships in the animal world and there's a new pair that's out to give some friendship goals. A small clip of a baby monkey riding on a stray dog's back has been shared on Twitter. The little one seems to have found a familial comfort in the dog and keeps playing and jumping around with him. The two seem to be quiet inseparable. It is nice to see such unusual friendships blossoming. Although it is not clear from where exactly the video is taken, the sentiment of best friends is clearly communicated. Dog Carries Abandoned Baby Monkey on Back to Police Station in Madhya Pradesh (Watch Video).

Twitter user Mahesh Naik @MaheshN1976 shared the small clip which shows a cute bond between a baby monkey and a stray dog. The monkey is eating a piece of bakery bread while he's latched on the dog's back. It does get down but keeps following the stray and jumps on the dog again. The dog has no problem with his little friend jumping and riding over him. The two then carry on and it goes on to show the beautiful bond of friendship they share.

Watch Video of Dog and Baby Monkey Being Unlikely Friends:

This reminds us of the time when a dog had adopted a baby monkey at a village in Madhya Pradesh. It was a pet dog named Ruby who adopted an abandoned monkey near Seoni Malwa in Hoshangabad district of MP. The monkey was reportedly attacked by a group of dogs but Ruby stepped in to save the little one. The two have been inseparable since then.