Dog-Faced Bat Goes Viral as Tweeple Cannot Wrap Their Heads Around the 'Bizarre' Creature! Know More About Buettikoferi Epauletted Fruit Bat and How They Balance Our Ecosystem 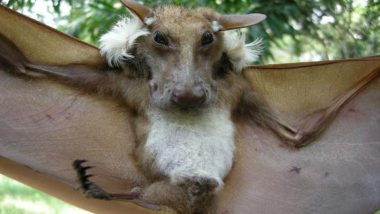 Bat with the face of a dog is going viral on Twitter. Netizens cannot stop talking about this dog-faced bat that is now taking over social media with people freaking out. Not many people know that this isn't some kind of mutation but Buettikofer's epauletted fruit bats do exist and are known to have a dog-like face. Such bats have huge wings,  are found in tropical forests and savannas, and are very important for our ecosystem.  Twitter user Kirsten Howard tweeted out the picture of this dog-faced bat and has taken Twitter by storm with hilarious responses. Netizens are not able to wrap their heads around this 'bizarre' creature that look both like a bat and a dog

While people cannot stop googling whether this dog-faced bat is real or just a product of photoshop, the picture is gaining traction in more that one ways. Some people are utterly disgusted while some cannot stop admiring the creature. "I know your tweet SAYS what this is but that didn't stop me from shrieking "WHAT IS THAT?!?!" and looking it up anyway," one user said. "Dog? cute, bat? cute, bat with a dog's face?", another shared the picture with a "shocked" GIF. Yet another Twitter user wrote, "Can you imagine being afraid of dogs and then finding out this thing exists?"

Check Out Picture of a bat with dog face, aka Buettikoferi Epauletted Fruit Bat:

Since we're posting weird ass bats, this is Buettikofer's epauletted fruit bat, a megabat that frankly has no business flying around with a dog's face pic.twitter.com/FlWl3ffZOg

Here Are some of The Reactions The Picture Received:

You know, I thought you were exaggerating, but no. This bat strike a dog's face.

For those who do not know the picture is that of a Buettikofer's epauletted fruit bat which is a species of megabat in the family Pteropodidae. While it may look bizarre to many, it is threatened by habitat loss. Its contribution towards keeping the ecosystem balanced is vital. Found majorly in Ivory Coast, Ghana, Guinea, Guinea-Bissau, Liberia, Nigeria, Senegal, and Sierra Leone, they usually reside in subtropical or tropical moist lowland forests, dry savanna, and moist savanna.

These Buettikofer's epauletted fruit bats feed on fruits majorly the fruits of the Cape fig and Ficus vallischoudae comprise almost 50% of the diet. Not much is known about how they reproduce however, it is assumed that they have two breeding seasons per year in January and July.

(The above story first appeared on LatestLY on Jul 03, 2020 10:52 AM IST. For more news and updates on politics, world, sports, entertainment and lifestyle, log on to our website latestly.com).