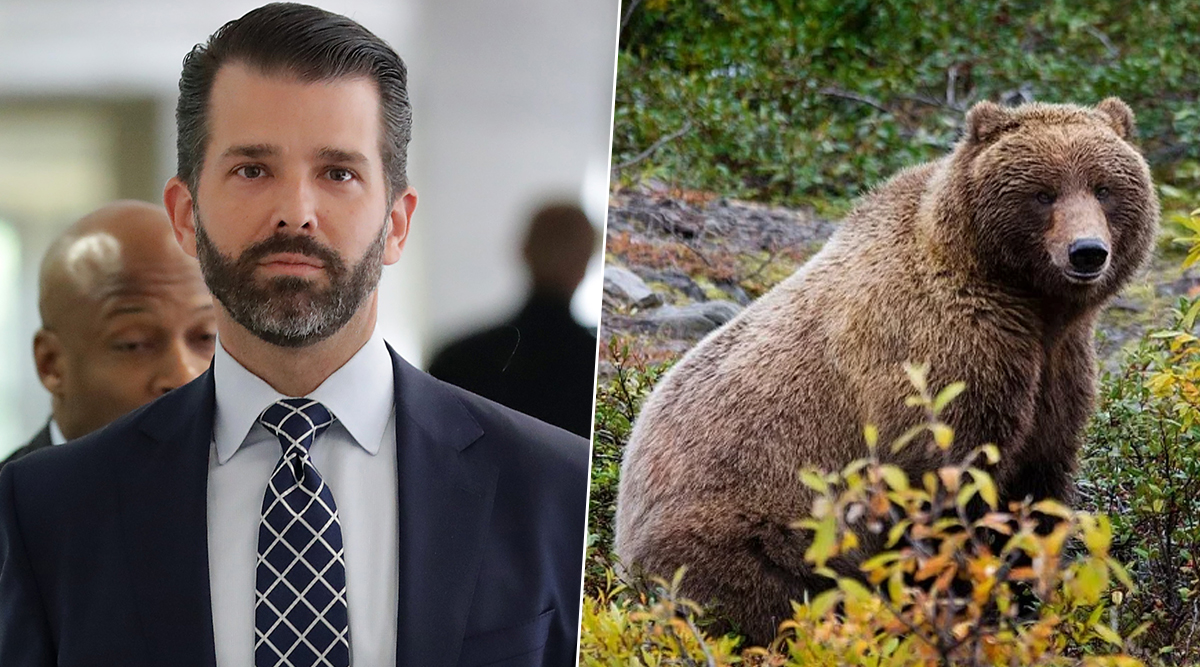 Donald Trump Jr. has received permission to hunt a grizzly bear in northwestern Alaska's Seward Peninsula. The president's son was one of three people who applied for the 27 slots for non-residents. The state carries out regular drawings to hunt various animals, including caribou and moose. While, generall the competition is stiff, Trump Jr. did not have much competition as many slots went unfilled. In order to carry out the hunt, the president's son has to pay a $1,000 non-resident fee as well as a $160 hunting license. However, as the news went viral, animal rights activists showed their disregard in the matter. Animal rights activists hit out at Trump Jr for his decision to kill animals. US Trophy Hunter Pays Pakistan Rs 77 Lakh to Kill Rare Himalayan Goat Markhor, Says it Helps Conservation!

Eddie Grasser, the wildlife conservation director for the Alaska Department of Fish and Game, said Friday that officials normally receive "thousands of applications" for such licenses. This time though, 24 slots were unfilled. Grasser said those who won the permits was "pure chance, luck of the draw."

Every year, 27 permits are handed out to non residents to hunt Grizzley #Bears in Alaska. Donald Trump Jr just got one. I'm routing for the bears (to run and hide) We need to Ban ALL #TrophyHunting. No exceptions. Even #POTUS son. pic.twitter.com/DkPLnuE1Zi

"Donald Trump Jr. one of only 3 people who wants to legally kill an Alaskan grizzly bear this year"

"He's welcome to try. Our sources tell us that 100% of all Grizzlies want to legally maul Donald Trump Jr." pic.twitter.com/BpAqvM5rOX

Well, Bears Are Going to be Team Now:

Yeah, seeing as to how Donald Trump Jr. just got a permit to go Hunt Grizzly Bears in Alaska. Arm the Bears, declare Open Season on All Trump's. I like that idea even better.

Meanwhile, Reuters noted that the state holds permit lotteries for bear, caribou, moose, and other animal hunting permits for the state's various regions. On average the number of applications far exceeds the number of spots available. Some 30,000 grizzly bears are believed to be living in Alaska. The Trump administration has been criticised by environmental groups for proposing the lift from the ban against baiting the bears in the state's national preserves. Donald Trump Jr Shares Video of US President Dancing As ‘Peshwa Warrior’ on Ranveer Singh’s Popular Track ‘Malhari’.

But state officials argue that it is necessary to kill more predators to open up more game hunting opportunities. Trump Jr. is a hunter who has travelled to countries like Mongolia and Zimbabwe for special trophy hunts. The 42-year-old has also travelled to Canada and Alaska on multiple hunting trips. He will be travelling to Alaska later this year to hunt deer and ducks. Jeff Flocken, the president of Humane Society International, said, "Advertised as a ‘dream hunt,’ this hunting trip will be nothing but a nightmare for the Sitka black-tailed deer and sea ducks who find themselves in the gun sights of Donald Jr. and whoever purchases this sick thrill."