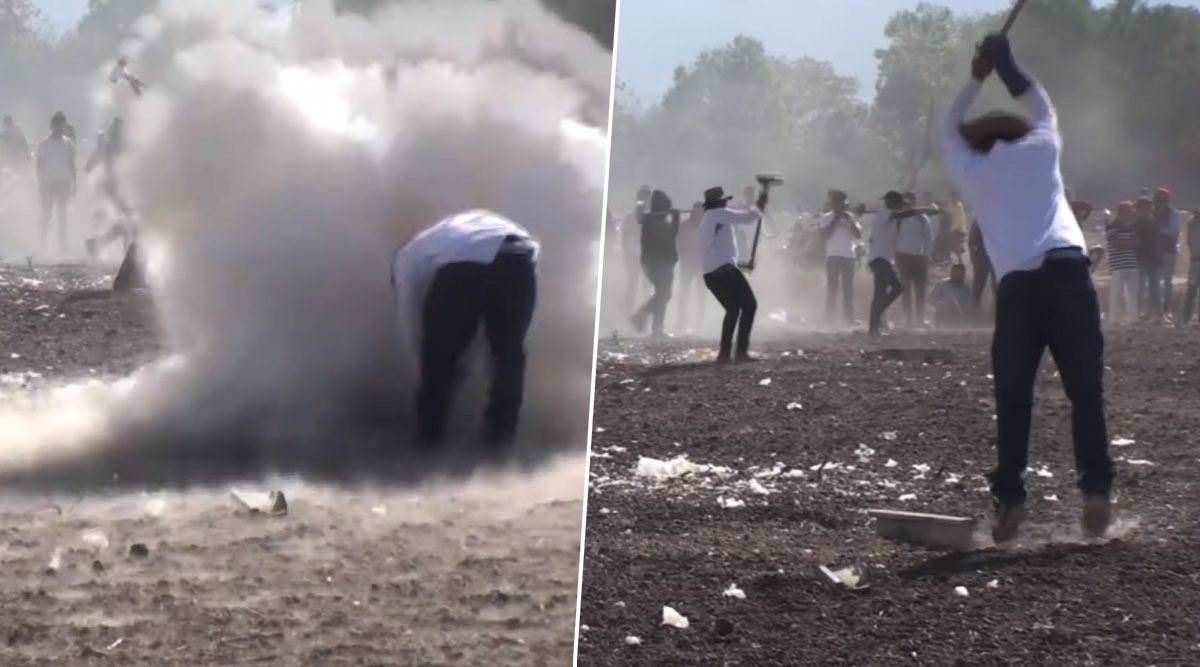 There are some rather bizarre celebrations that are marked around the world and among them is the "Exploding Hammer" festival in Mexico. Celebrated annually in a small Mexican town of San Juan de la Vega, it is an honour to celebrate eponymous saint, San Juanito. The celebratory event which takes place in February, took place this year too and it has ended up injuring almost 43 people. The atypical celebrations here have locals carrying hammers which are attached with a mixture of chlorate powder and sulfur. So on hitting the grounds, it explodes and the other revellers enjoy the massive clouds of smoke that are emitted. Breath-Taking View of Flames and Fireworks Take Over As Myanmar Fire Balloon Fest Opens (Watch Video).

The festival was held yesterday and one man injured his leg in the blast. The force of this explosion throws around a lot of people. A total of 43 people were injured in this celebration yesterday. The festival which is celebrated for local religious figure, San Juanito, he was more of a robber-kind person who used to rob mule drivers and gave their money to the poor. Because of his penchant of stealing from the rich and giving it to the poor, he got a reputation of "Mexico’s Robin Hood." Hot Air Balloon With Fireworks Explodes at the Tazaungdaing Festival of Lights in Myanmar Leaving 9 Injured, Watch Scary Video.

Here's a Video From 'Exploding Hammer' Festival Celebrations in Mexico:

People attach packets of chlorate powder and sulfur at the end of sledgehammers. When they hit the ground, it causes quite an explosion leaving behind clouds of smoke and small debris of stone fall back. The practice results in a number of injuries year after year. This tradition has been carried on for almost 300 years. Also called as "Bomb Hammer party", it is a celebration seen like nowhere else in the world. Today, the town is famous for this festival although many people have opposed and want to ban it completely. It is among the most dangerous festive celebrations in the world.