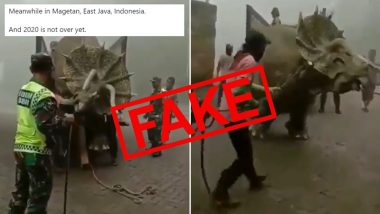 2020 is not yet over and in the final chapter, were you expecting dinosaurs coming to life? Well, that's a little too extreme to be possible. But a video of a dinosaur being captured in Indonesia has been doing the rounds on social media. It is a Triceratops genus of dinosaurs that lived 68 million years ago! A video of the same large reptile being captured by four men and struggling with it has been doing the rounds with different claims. The claims suggest it was caught in East Java's forest, while some say it is Brazil. The differing claims itself point out that something is not right. Firstly, it is a fake animal, a mechanical puppet which looks very real. These are similar to the puppets that are made and kept on display in Jurassic theme parks.

Video of this dinosaur or triceratops has been shared online by multiple accounts with different claims. And with all that's happening in this year, some people believe it to be true. It is very similar to the dinosaur clone in China which many people thought to be real. In this particular video going viral, there's a massive dinosaur stepping out of a truck and being pulled by four men, as he puts up a show of his strength. The video is shared online with captions like, "TRICERATOPS at Mojosemi Forest Park, Magetan, East Java, Indonesia." While some others claimed that Brazilian authorities captured a live triceratops in rainforest. Netizens are sharing it across, without verifying, thinking it to be true that dinosaurs are coming to life! Find Real Dinosaur Fossils At These 5 Places Around The World.

🚨 BREAKING: Brazilian authorities have captured a live triceratops that was discovered while clearcutting the rainforest. 😱 pic.twitter.com/vxC2K2Hfsm

All of these tweets are going viral as people panic and share what's happening without confirming. While the animal sure looks beastly, there is no need to worry as it is not real. One of the users who shared the clip first, also posted an extension of the video which clears that it is a mechanical puppet.

Check The Other Video Here:

Another user confirmed that it is a fake animal and the intention was to cause a buzz for Mojosemi Dinosaur Park and it did work.

After a bit of research & translation, I now know this is a fake dinosaur for Mojosemi Dinosaur park in East Java.

The intention was to cause a viral sensation hence the dramatization & it worked.

Very little is available in english so the vid is still trending pic.twitter.com/kxxxfKZU7G

As you can see, the dinosaur puppet is being taken into the park for display. And the video is enthralling to show it will look for visitors! So don't worry, there are no live dinosaurs found in Indonesia.

It is not a real animal, but a mechanical puppet.

(The above story first appeared on LatestLY on Dec 16, 2020 10:49 AM IST. For more news and updates on politics, world, sports, entertainment and lifestyle, log on to our website latestly.com).